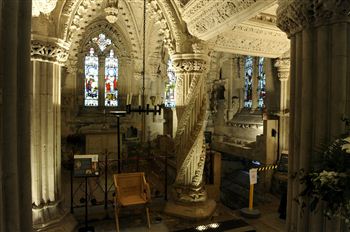 The plot of Brown’s new book has been one of the most guarded secrets in publishing history, but is widely expected to use Scotland as his source material.

The Lost Symbol is released on Tuesday and the cover of the US edition features various Scottish masonic symbols.

But author Ashley Cowie, whose own book The Rosslyn Templar sheds new light on the chapel’s many secrets, has slammed Brown for writing “fiction not fact” concerning the world-famous church.

Brown’s new book features the symbol of the 33rd degree of the Scottish rite of Freemasonry, the highest rank within the craft in this country, and is widely expected to condemn the first US President George Washington as a traitor.

Mr Cowie, 36, said: “I think he will connect Scottish Freemasonry with George Washington. What if the symbol of the 33rd Rite is imprinted on whatever it is that’s in Washington’s coffin?

“The number 33 is very important in history, it vwas the age that Christ died, so perhaps he will tie in the bloodline again.

“Washington is about to be lambasted. The figurehead of American independence will be revealed as traitor with something very important buried in his coffin with him.

“Dan Brown is about to make a huge controversy because he knows it sells – he is going to create uproar in America.”

The new book is thought to be based on the idea the Holy Grail was taken to Scotland in 1368 by a Scottish Knight Templar called Henry Sinclair, the grandfather of the man who built Rosslyn Chapel.

And although Mr Cowie makes the same argument in a television documentary to aired next week, much of his work has been to debunk Brown’s claims surrounding the Midlothian chapel.

He said: “Authors like Dan Brown twist history to present the most wonderful and entertaining view of the world, but it is fiction not fact.

In the Da Vinci Code, Brown said that secret descendants of Jesus and Mary Magdalene were the true Holy Grail, causing huge outrage among Christians worldwide.

But, just days before the official release of The Lost Symbol, Jason Kaufman, Brown’s editor, was giving little away about the tome.

He said: “Dan’s new novel is largely set in Washington DC, though it is a Washington few will recognise.

“As we would expect, he pulls back the veil revealing a world of mysticism, secret societies and hidden locations with a stunning twist that long predates America.”

The Lost Symbol is released on September 15, and is published by Random House.