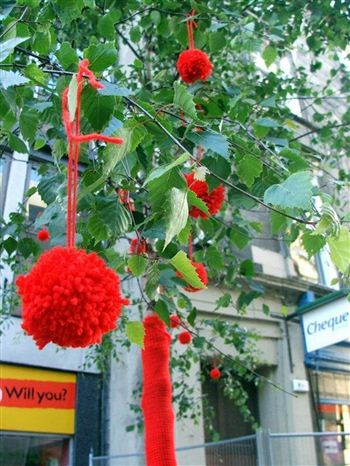 A SCOTS city centre has been given an unusual makeover – with its landmarks being covered in red wool.

Familiar sights in Inverness have been encased in the bright wool as part of a publicly-funded arts project.

The scheme – which puts an unusual twist on the idea of painting the town red – has seen large pom-poms hanging from lampposts, crocheted spider webs strung across alleyways and tombstones in the city’s ancient graveyard adorned with cosies.

The installation, organised by Inverness Old Town Art (Iota), forms part of a project to celebrate the regeneration of the city’s Old Town.

Iota hope the fun-filled “guerilla knitting” scheme, which uses 45 miles of red wool, will entice visitors and shoppers to the city centre.

But the organisation are refusing to say how much of the £300,000 budget supplied by the taxpayer, is being used to fund the colourful venture.

A spokesperson said: “Focusing on costs of events may mean the actual social and promotional benefits to the area and arts community are overlooked.”

However, critics have branded the scheme a waste of taxpayer’s money claiming the cash could have been better spent on improving local services.

Annie Marrs and Jennifer Cantwell are the two artists behind the art group’s latest scheme in Inverness following the Iota’s previous project, Inverness in Pants, when large papier-mache briefs were strung up across the city’s Church Street. 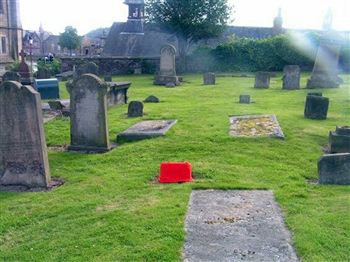 The pair spent three months knitting the fluffy street furniture and insist the public money is going to good use.

Ms Marrs said: “The idea is to create something which is quite feminine, tactile and craft-based and bring it into a concreted, brick world.

“We deliberately chose to use bright, blood red and the idea is that we are connecting spaces like an arterial line through the town.

“Our work is about love and bringing a nurturing feeling back to the city.”

The artists began their prank at 5.30am last Monday and were granted permission from the city’s Old High Church to place the woollen decorations on the historic tombstones.

Ms Marrs added: “The minister and the people whom look after the graveyard were satisfied nobody would be offended.”

But locals and the area’s politicians have been left less than impressed the stunt.

One city centre publican, who wished to remain anonymous, said: “No offence to these lassies but there is a recession on and I’m sure there are better ways to spend public money than on giant balls of wool.

And Mary Scanlon, the Conservative Highlands MSP, said: “I am far from convinced that giant pompoms are the best way to promote the city.

“Art is meant to be challenging, but I do think it is disrespectful to cover gravestones in wool, irrespective of how old they are.”