WORLD-class violinist Nicola Benedetti has revealed that she practises in her pyjamas “all the time” – in preparation for her huge sell-out concerts.

The Scots-Italian beauty said that she has so much playing to get into each day, that she slots sessions in whether in her kitchen, around the house or in her jim jams. 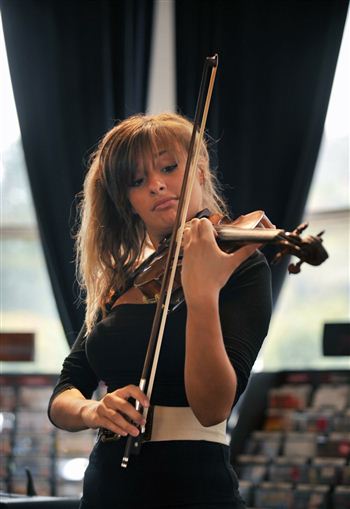 Speaking after a signing for her 4th album Fantasie and performance for fans at HMV in Edinburgh today, Nicola revealed it’s not all red carpet glamour in the world of classical music.

She said: “It can be very tiring to practice six or seven hours before a concert but sometimes it’s necessary, on average it’s about five hours a day.

“I practice in my pyjamas all the time, and in my bedroom or kitchen or wherever.“I think I had to practise in an airport once, which was a bit desperate – that was probably the weirdest place.

“There’s usually a room somewhere – no matter how small or disgusting – where I can go and play before concerts.”Nervous Nicola, 22, from West Kilbride, North Ayrshire, also revealed that she was a bit put off just before a concert after a die-hard fan shouted some encouragement before her show.

She said: “I was playing at the Manchester Bridgewater Hall and someone shouted out just before I was about to play The Lark Ascending.

“It was complete silence and this guy stood up and said, ‘come on Nikki, show us how you can play’ or ‘show us what you’ve got or something like that.’

“I think he was Glaswegian.”

And the bashful beauty also said that she may have found love after years of hectic tours around the world’s top music venues.

Nicola will be returning to Edinburgh in November to play at the Usher Hall as part of her new tour.