A SACKED builder who downed eight pints before torching a block of flats has been jailed for 18 months. 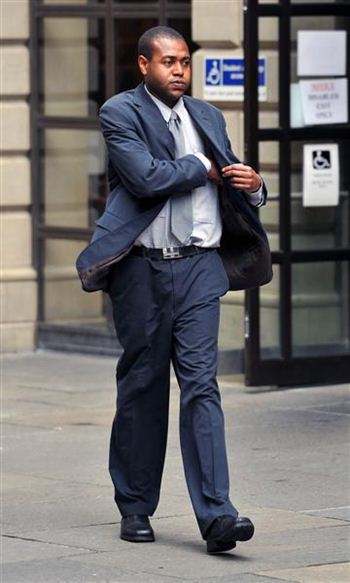 David Muchemwa, 31, was sacked by Cala Homes just days before he soaked a bundle of clothes with petrol and used them to set fire to their Fettes Rise development in Edinburgh.

He claimed he had first checked each flat to make sure they were empty.

But he missed two pensioners who were left trapped in their third-storey home.

The terrified couple tried to escape but were blocked inside their burning home by thick black smoke.

Hero fire-fighters managed to rescue the 72 year-old man and his 68 year-old wife from the blaze on December 19 last year – after firebug Muchemwa had called for their help on 999.

“Terrified” of being sent to prison Muchemwa – whose brother was said in court to be a policeman – desperately pleaded with the court to let him try to pay the £52,000 damage caused to the 16-home flats.

But today (Tues) he instead began a prison sentence.

Muchemwa had been on a drinking binge, angry that his agency contract with Cala had been brought to an end after just two months.

Fiscal depute Aidan Higgins said Muchemwa had drank eight beers and made five calls to his former employers over the course of the day before calling his boss and making threats.

He said: “On the day of the offence between mid-morning and evening the accused telephoned the site manager at Cala Homes on five occasions.

And at 8pm Muchemwa made his last call, telling the site manager: “It is me, I have done it, I have set it on fire.”

Prosecutor Mr Higgins said Muchemwa had set two fires at 18 Fettes Rise – the only block that had been completed on the development.

Mr Higgins said the pensioners in the building realised the block was ablaze but were unable to get out.

Muchemwa had by this time returned home Wester Drylaw Place home in Edinburgh where he made another 999 call.

He spent around 30 minutes giving an account of his actions to an operator, telling her he had set fire to the flat because his “boss had not paid him” before police officers arrived and took him to Drylaw Police Station.

During an interview he told them he had downed about eight beers before he set fire to the building.

After being released on bail, Muchemwa was taken in by his brother – a police officer with Lothian and Borders Police – while he sought further labouring work.

His defence agent Leanne McQuillen said: “He has an ongoing difficulty with alcohol.

“He shows genuine remorse and is very upset and tearful when discussing this offence.

“He is extremely horrified at his own behaviour but cannot explain why he committed this offence.

“He wishes to apologise to all involved and is terrified of the prospect of custody, but feels that if that decision is taken then he very much deserves it.”

Sheriff James Scott told him: “You knew very well that this was a place in which people might be staying.

“That is why you knocked on the doors.

“Two people of mature years were trapped and couldn’t get down the stairway, which is potentially a very hazardous and dangerous situation.

“Members of the public are entitled to look to the court for protection in cases such as these, therefore I see no alternative to custody.”

CALA to debut in East Calder at upcoming development launch