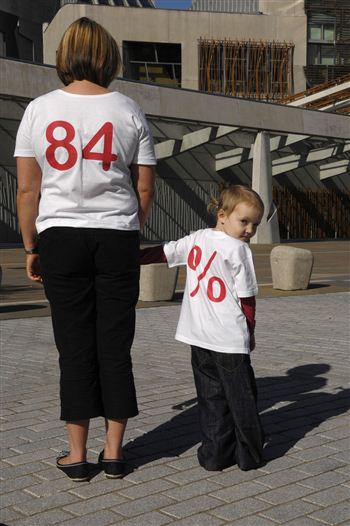 HOMELESS campaigners descended on Holyrood today to present a six-foot-tall placard to MSPs demanding that the Parliament earmark more investment for social housing.

Representatives from the Shelter pressure group delivered the ‘Declaration for Homes’ to try and persuade decision makers to tackle what they argue is a chronic shortage of rented housing in Scotland.

Campaigners delivered the declaration as a report by the Chartered Institute of Housing revealed that 84 per cent of people in Scotland believe that affordable housing should be a top priority in the upcoming Scottish budget.

Shelter said that recent investment in programmes for homes-to-buy has not helped people who can only afford to rent.

The group were led by Claire McLaughlin, 32, a mother of two whose life was turned upside down when she lost her home and her job as a dental nurse.She was moved around between temporary accommodation and even stayed in a homeless unit for a time, with her children.She now lives in a bedsit in Glasgow, with daughter Carmen, four, and son Charlie, two.

Claire said: “I was given a house by the local housing association that was rotten with dampness, I then asked to be re-housed because it was uninhabitable.

“They had nowhere to put me so we ended up in a homeless housing unit.

“I lost my job as a dental nurse because of the homelessness.

“To be in a homeless unit was an experience – I felt really, really vulnerable being there.

“At the moment me and my children are living in a one bedroom flat because they don’t have adequate housing for us.

“It’s been a real struggle to get back up on level again after all that. 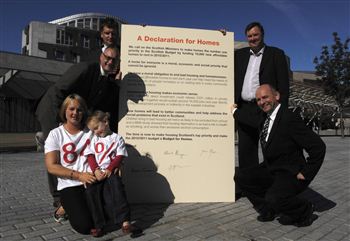 “There’s loads of people in my situation, that’s why I’m here today.”

Claire is hoping that the Government will invest in improving existing conditions in council houses, as well as giving people better options to rent homes.

He added: “If I can even help one person to get a house or get out of bad housing, then that’s a lift for me really, makes me feel a bit better.

“I would like to see the Government putting more money into housing – the council houses that are in Glasgow are just atrocious.

“The dampness and the living conditions are just a nightmare.

“Even if they put money into decorating and improving what they’ve got.

“We have a small house but we’re calling it home at the moment – the kids are just happy to have somewhere to call home.

“Obviously the homeless unit was very upsetting for them.

“We’ll need to move again, the kids don’t understand really what’s happening to them, but it is quite upsetting for them.”

Graeme Brown, Director of Shelter Scotland, said that many benefits come with investment in housing.

He said: “Resources are tight but housing ticks all the right boxes, housing people who desperately need a home, providing a fiscal stimulus, sustaining jobs and helping to meet the 2012 homelessness commitment – there has never been a more urgent time for a ‘Budget for Homes.

“People in situations like Claire’s bring this issue home to people.

“We know that this year in Scotland we are expecting to see something like 6,500 familes have their homes repossessed.

“Where are those families going to go? – They can’t stay with relatives forever.

“This is going to put even more strain on an already creaking system.”

Craig Stirrat, chairman of the Chartered Institute of Housing, said: “Scotland needs new affordable homes; it also needs action to tackle poor conditions and energy efficiency in existing homes and to work to improve the neighbourhoods in which people live.

“Action now can provide good homes and neighbourhoods for the future, help people access or sustain employment and give the Scottish economy a boost.”

The campaigners also highlighted the social problems which stem from sub-standard housing.

Children living in poor housing conditions are twice as likely to be expelled from school and damp housing can be as damaging to health as smoking.

Campaigners are seeking £650million of direct investment in housing, but add that this would bring £330million in private finance.

They also highlighted that such a building programme could secure up to 16,000 jobs for Scotland.

A Scottish Government spokesperson said: “We agree that more affordable homes are required across Scotland.

“We are on track to approve grants for 8,100 affordable homes this year, backed by £644 million.

“We are investing £50 million to reverse decades of decline in council house building.

“So far, 17 councils are benefitting from the largest council house building programme for 30 years with over 1300 new council homes planned across the country.

“We are also taking action to prevent homelessness occurring in the first place, with new guidance having been issued to local authorities in June.

“Reforms proposed in the recent consultation on the draft Housing (Scotland) Bill included ending the Right to Buy for new social housing tenants and for tenants in all social housing.”