Anster chippy gets nod of approval from Michelin Star chefs 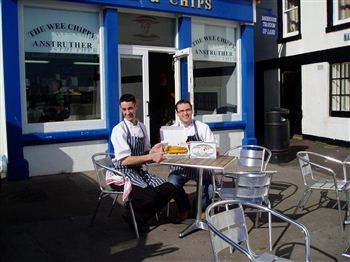 SCOTLAND’S most famous chip shop is facing a battle to retain its crown as the best in the business – by a rival situated just yards away.

For years the Anstruther Fish Bar in Fife has been crowned Fish and Chip Shop of the Year – and is the current reigning champion.

But the popular eatery now has a rival vying for its title right on its doorstep after missing out on a prestigious nod from two of the best known chefs in the world.

The Wee Chippy – which sits just yards away – has just been given the accolade of ‘The Best Place in the World to Eat Fish and Chips’ as voted by Michelin Star chefs Raymond Blanc and Michel Roux.

They were overwhelmed with the standard of food on offer at the tiny Fife chippy and listed it as among their top 50 restaurants and cafes around the globe.

Owners Kevin McElhinney, 34, and Charles Scott, 32, are no strangers to mixing with the elite as both sous chefs have previously prepared food for Royalty.

Kevin’s jobs have included stints on the luxury Royal Scotsman train and at Gleneagles, while Charles has worked at Buckingham Palace.

But Charles revealed that they didn’t know about the award until someone else mentioned it to them.

He said: “A friend of the family told me about it on Sunday. I was totally shocked as we knew nothing about the accolade.

“It is fantastic news and hopefully the award will entice more customers to try our fantastic fish and chips.

“It’s all been totally out of the blue and it hasn’t really sunk in yet.”

Kevin, who was also delighted with the accolade, said: “It’s fantastic to receive recognition for our product and it is a great morale boost for our hard working team.

“It’s been really good, to get than kind of recognition from people like Raymond Blanc and Michael Roux.

“Our ethos is basically to provide the best fish and chips we possibly can.

“Our fish is sourced from a local supplier Ian Fleming – he scrutinises every fillet, to make sure we don’t get anything the wrong colour or wrong size.

“The Anstruther Fish Bar is the larger establishment – they get called the big chippy around here and we’re the wee chippy – but we’re happy with that.

“It’s a close knit team, and it’s really rewarding to get awarded something like this.”

And while the boys admitted that a Royal Assent might not be on the cards just yet – they’d love to have the Queen come and sample their top dish.

Kevin added: “You never know, maybe one day if old Lizzie is up hopefully she’ll drop in and try our fish.”

Jeff Smith, chef at the Ansruther Fish Bar, said it was good for the area.

He added: “Congratulations to The Wee Chippy – the town seems to be doing very well.”