THE BODY of a woman has been found under the floorboards of a house in West Lothian.

Forensic teams, some wearing white paper suits and face masks, were examining the remains of the disabled woman named last night by locals as Londoner Carol Jarvis, who was aged in her 50s. 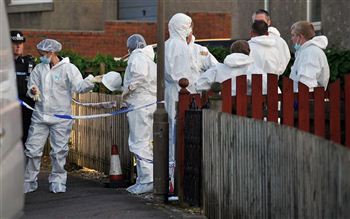 It was understood police fear she could have lain dead in the four in a block flat at 6 Balbardie Crescent in Bathgate since last Friday.

Officers, who cordoned off the entire street yesterday, were last night (Wed) also said to be searching for missing husband Harry who also lived at the address with her.

They also examined drains and carried out door to door inquiries all day yesterday as white suited forensic teams combed the house for clues.

The alarm was raised by worried locals who hadn’t seen Carol, understood to have suffered from a mental health disability, for some days.

Officers finally made the horror find at around 1am yesterday.

The couple are also understood to have had two sons and two daughters, who didn’t live with their parents.

Police refused to confirm any further details of the names of those involved.

But they did admit they were treating her death as “suspicious”.

Detective Inspector Phil Gachagan, who is in charge of the investigation, said: “We were called to the house in the early hours of this morning by concerned members of the public.

“Officers searched the house and they found what is believed to be a dead body. 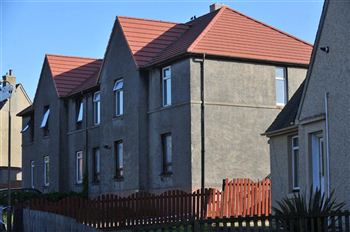 “We have since carried out a forensic investigation and have confirmed that the body of a female was within the house.

“We are in the process of carrying out our investigation into what is being treated as a suspicious death.”

He added: “We are appealing for any members of the public who have information of any movement around the house from about Midday on Friday September 11 to Tuesday Sept 15 at 11pm.

“We will continue our enquiries including house to house and an incident room has been set up at Livingston police station.”

The body was found in a block of four homes, where neighbours said they had not seen the couple who lived there since Friday.

Helen Edwards, 65, used to live at number six but moved 12 years ago when the Jarvis family moved in.

She had lived there for 20 years and said the bottom-floor home had three bedrooms on bottom floor.

But she also believed an underground room had been built since she left.

She said: “I heard that the man made a room underneath the house and had a snooker table in it.”

“I didn’t really know them but they seemed to not talk to anyone at all.

“They had a lot of problems and police were never away from their door.

“I heard about it at around 9am and when I saw the forensics I thought it was a murder.

“I just think it is terrible.

“I’m not creeped out by it but I am glad I am not there anymore and I would not like to go back into that house again. 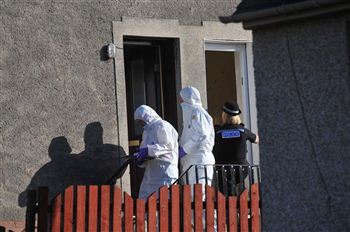 Previously the couple had complained of being harassed by anti-English thugs and claimed dog excrement had been put through their letterbox and windows had been smashed.

They also said graffiti had been daubed on the walls saying: “Go home English pigs”.

Their ordeal made national news after they moved to West Lothian from London in 1993,

It was not known whether or not the previous incidents were linked to yesterday’s events.

One neighbour who would only give her name as Margaret, 37, described Balbardie Crescent as a “quiet” area.

She said: “I have seen a lot of police vehicles going back and forward but I never thought it would be anything like this.”

“I live on the street behind this and to be honest they are both quiet streets.

“It’s sad and it’s a shame I have to live in an area where these things happen.

“It makes you afraid and I keep my door locked all the time.

Another neighbour, who lives across the road from the house where the body was found, said:  “As far as she know she’s been killed, that’s just the rumour we’ve heard.

“I don’t think they’re right in the head. She doesn’t work, I think she’s on incapacity benefits.

“They have two daughters and two sons, they’re mainly in their 20s. I think the youngest is 17, none of them live at home but there’s always people going in and out.

“It’s been years since I’ve spoken to her, I don’t think anyone in the street’s got anything to do with them.

“We’ve had the riot squad up here one time, She came out swinging a hammer, at one neighbour and everything.”

A police spokesperson added: “The death is being treated as suspicious, however at this time it is not possible to confirm the identity of the victim.

“A full forensic examination is being carried out, and until we have the results available we will not be in a position to give any information about the body or the circumstances surrounding the death.”

In January 1998 the street suffered another tragic death when Gary Johnstone, 25, was found in a lane with the top of his head hacked off by a spade.

Andrew Gillon, 30, was found guilty of killing his long term pal and sentenced to life in jail the following May.