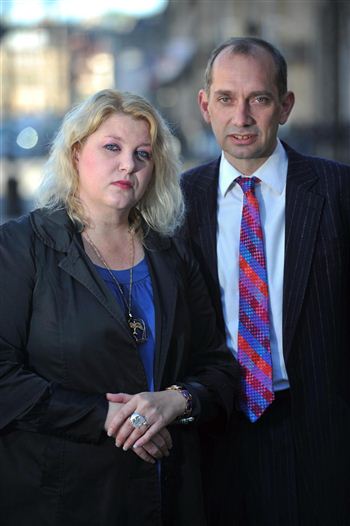 Richard Saville-Smith from Edinburgh suffered a recurrence of his bipolar condition just seven weeks after being appointed as PR manager for Year of Homecoming.

Giving evidence to the three man employment tribunal panel, an emotional Gillian Saville-Smith, 47, claimed her husband was a “high-suicide risk” when suffering from the condition.

She said: “Richard disappeared the day of a large VisitScotland event he was working on. I received a letter from VisitScotland, delivered by a courier company, stating he hadn’t turned up for the event.

“I immediately contacted the police and they said that they would visit his work, and in the meantime they would try and check his bank account for movement

“I then started to receive texts from Richard so I knew he wasn’t dead at least, but then his phone went dead and the texts stopped.”

During her evidence, Mrs Saville-Smith broke down in tears, and the tribunal was halted to give her a few moments to recover.

She told the panel: “I was really worried because the bipolar condition has a high suicide risk attached to it.”

Mr Saville-Smith then turned up at the New Craigs Hospital in Inverness hospital 48-hours after going missing and subsequently received three weeks of treatment in a secure unit there.

The 48-year-old is blaming bosses at Homecoming Scotland for the onset of his illness after they increased his workload but failed to provide him with any additional support.

Mr Saville-Smith is also claiming a “bullying” style of management and a lack of management of support contributed to his breakdown.

Following his spell in hospital, the PR expert was subsequently sacked by employers VisitScotland for being incompetent.

Earlier in the hearing there had been several heated exchanges between Mr Saville-Smith and VisitScotland’s legal representative Paul Brown when the solicitor accused the PR manager of fabricating job applications in a bid to further his grievance.

Mr Brown said: “You suggested to the tribunal you have applied for various jobs since your employment with Homecoming finished but there is no evidence of you ever sending these letters or of receiving any rejection letters.

“I put it to you that you have not applied for any of these jobs.”

Mr Saville-Smith retaliated by claiming that all the replies came via the telephone or by email which he had since deleted.

But Mr Brown then produced a job application from before Mr Saville-Smith was ever employed by VisitScotland.

Mr Saville-Smith apologised to the tribunal and claimed the inclusion of the application “must have been an error on my part”.

During the hearing Mr Saville-Smith described the three meetings he had with the Homecoming management after being signed fit to work by his psychiatrist.

He said: “I was expecting to return to work after my spell in hospital and thought the meetings were to prepare for my return.

“But, I was put in a position whereby instead of a reasonable adjustment meeting I was facing a disciplinary meeting.

“The invitation was for a reasonable adjustment meeting and not for a disciplinary one.

“I felt at the time they were trying to trip me up. The meetings were very hostile.”

Following the final meeting on November 21 Mr Saville-Smith was told his employment was being terminated.

Mr Saville-Smith has previously told the panel that he believes the Homecoming Scotland management had altered minutes of those meetings and deliberately deleted his staff email account in their bid to discredit his bid for compensation.

VisitScotland have vehemently denied those allegations.

The experienced PR manager, who was embroiled in a much-publicised legal dispute with the estate of author CS Lewis over an internet domain name last year, was employed to head the Homecoming project in June 2008, but was effectively sacked from the £40,000 position following his spell of ill health.

The father-of-one, who was in charge of the £250,000 Homecoming Scotland budget, is seeking around £50,000 in unpaid wages and damages on the grounds of disability discrimination legislation.