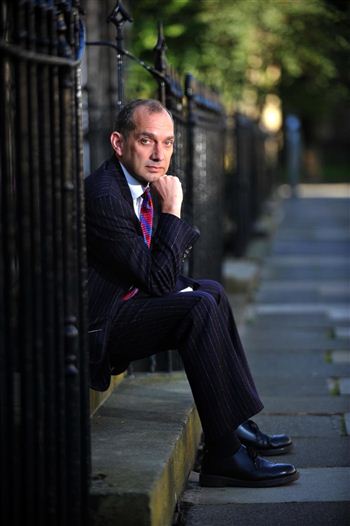 A spin doctor appointed to spearhead the world-wide Homecoming Scotland campaign deliberately failed to disclose his bipolar condition to his employers as he battled to save his job, a tribunal heard yesterday.

Richard Saville-Smith, from Edinburgh, had been in the position as PR manager of Year of Homecoming for just seven weeks when he suffered a mental breakdown which he claims was caused by a heavy workload and a “bullying” style of management.

But when employers VisitScotland conducted two back-to-work meetings with the 48 year-old PR guru, he failed to divulge the true nature of his condition.

VisitScotland claim it was a full seven weeks following Mr Saville-Smith’s absence before they became aware of his bipolar condition.

After being treated for his breakdown, in which he spend three weeks in a locked ward in a psychiatric facility, Mr Saville-Smith was sacked by VisitScotland for being incompetent.

Giving evidence to a three man employment tribunal panel yesterday (17/09/09), Fiona Reith, VisitScotland’s HR manager, said: “Following Richard’s absence we were told he had work related stress but we didn’t have any medical notes or records to back that up, only Mrs Saville-Smith’s word for it.

“We needed to find out the true extent of his stress. Initially, we were unaware he had been in a psychiatric hospital and when he was released we invited him to come in for a meeting to find out what was going on.

“When an employee is off with work related stress we wouldn’t just expect them to come straight back to work without a meeting.

“We then received a hospital note but it failed to tell us anything substantial.

“The first meeting we had was just like any other but the Saville-Smiths were very defensive from the start.

“It was a hostile atmosphere because of them.

“Richard didn’t seem to be prepared to answer our questions and kept going on about needed more staff.

“We still didn’t know what was wrong with him so it was impossible to make any reasonable adjustments to his position.”

“The first time I knew about Richard’s bipolar disorder is when I received a letter from his GP on October 5, almost seven weeks after he went off ill. I feel we never did get to the bottom of his stress.”

But Mrs Gillian Saville-Smith, 46, claimed the back to work meetings were “hostile” towards them and that her husband was not compelled to fully reveal the nature of his mental health disorder.

She said: “I attended the first meeting with Richard and the atmosphere in there was very hostile towards us. I just couldn’t understand the attitude of the VisitScotland management.

“If he had been hit by a car or had cancer I believe he would have been treated differently.

“We didn’t try to hide the nature of his illness, the simple fact of the matter is that we were never asked. All they needed to know was Richard had been absent with work related stress.

“We were not at liberty to divulge the actual diagnosis due to patient medical confidentiality.

“The stigma attached to mental health problems is so great that it might have put Richard under more pressure if everyone knew he suffered from occasional bouts of bipolar.”

Mr Saville-Smith was initially employed to mastermind the Homecoming Scotland project in June 2008 but was eventually dismissed in November 2008.

The PR manager claims he spent nine weeks “in limbo” following being signed back to work by his psychiatrist in September 2008 because VisitScotland refused to allow him to resume his position.

Mrs Saville-Smith added: “There was no reason Richard could not carry out his day to day duties in full because that is what his psychiatrist told us.

“The news of the dismissal was a big shock. He felt pretty shattered by it all. He was really gutted.”

The sacked PR executive, who sparked a two day police hunt after he disappeared following the onset of his bipolar condition, has previous told the tribunal that VisitScotland management deleted his email account and electronic diary in a bid to hinder his claim for unfair dismissal.

Mr Saville-Smith is claiming around £50,000 in unpaid wages and damages after having his employment terminated in November 2008.

The tribunal continues in December.