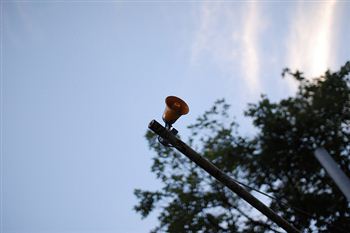 COUNCIL bosses have fitted loudspeakers to CCTV cameras to help evacuate a Scottish city in the event of a terror attack.

Speakers in Glasgow city centre – costing an estimated £27,500 – have been erected to better prepare people for a massive terrorist incident.

The speakers would give details of special assembly points and escape routes out of the centre.

The new programme is part of Glasgow Council’s City Centre Evacuation Plan – brought in after the attack on the city’s airport in 2007.

The scheme is expected to be rolled out in other UK cities to prepare Britain better for a full-scale emergency disaster.A Community and Safety Services spokesman for the council said: “A number of CCTV cameras have been fitted with speakers.

“Should the need arise to implement the City Centre Evacuation Plan, these will be used to communicate important messages to the public.”

For the plan, Glasgow has been divided up into 22 areas to manage ongoing attacks.

The plan is the first of its kind in Scotland and is expected to be rolled out in other UK cities.

The scheme is similar to a system trialed in Middlesbrough last year, where CCTV camera fitted with speakers blurted out commands to people for breaching of the law.

Breaking the bias over discriminatory pay on women’s day