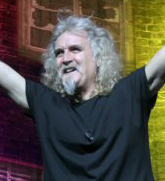 The comedy legend will star alongside Reese Witherspoon, Seth Rogen, Emma Thompson and Julie Walters in The Bear and The Bow – a fairytale about a 10th Century Scottish princess.

The Big Yin is to play King Fergus, whose daughter Merida turns her back on her royal duties and escapes the king’s castle to roam the Highlands.

Merida aims to become a champion archer, but brings disaster to her father’s kingdom after an ill-fated decision – which she must put right.

Veteran filmmaker Brenda Chapman has penned the story and is now set to direct the production, which is due to hit cinemas in 2011.Chapman aims to make the movie a cross between a Hans Christian Andersen tale and the story of the Brothers Grimm.

And the director revealed that despite hailing from Illinois and living in California, she was delighted to write a tale about Scotland, where he grandparents are from.

Speaking at the presentation for the new movie, John Lasseter, chief creative officer at Disney Animations and Pixar said he was looking forward to working on the new project.

He said: “We’re very excited about The Bear and The Bow and to be setting a film in Scotland.

“The Highlands provide a great backdrop for animation.”

Connolly has just starred in US action sequel Boondock Saints II, as a shadowy hitman called Il Duce, who helps his sons take on the Boston underworld.