ONE-TIME FHM honey Gail Porter made a splash at an Edinburgh swimming pool yesterday while teaching kids about how to save water.

Their visit comes as news of Scots’ shower habits was released.

According to a nationwide survey, Scots claim to spend roughly 50 hours a year in the shower – 12 hours longer than their English counterparts.

38-year-old Porter, who has battled alopecia since 2005, said that having no hair had made her cut down massively on her shower times.She said: “I don’t spend very long in the shower because I’ve got no hair! Also I always set it too cold so I’m in and out within about a minute.” 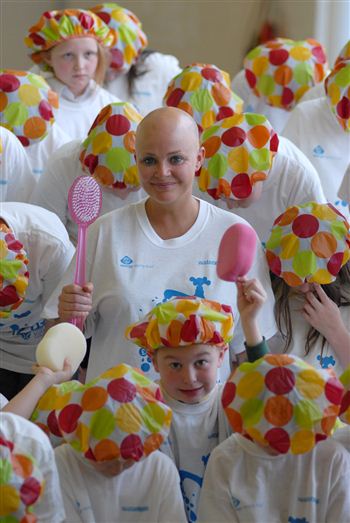 “I’m really big into saving the planet – my daughter Honey and I do everything from recycling to taking a tandem bicycle to school.

“Not everyone has that understanding and sometimes it takes a little bit longer – so anything that helps the environment and involves kids I’m well up for.”

“It’s good to teach them about the environment while they’re nice and young, and then they can think its fun as well.”

According to the same survey, residents of Edinburgh alone could save more than £1 million and almost 7,000 tonnes of CO2 if they showered for just one minute less.

And a new scheme, funded by the Scottish Government and the EU, will see those living in the Capital being able to access a new phone service for free water energy advice.

Stewart Stevenson MSP, Minister for Transport, Infrastructure and Climate Change, said: “We have a whole range of climate change measures on the agenda.

“Young people are the people who understand this issue, and of course they are the people for whom we are ensuring that there is a world worth living in.

“Many young people do get the climate change issue, but we have to persuade their parents and other people too.

“Their involvement is absolutely vital.”

Commenting on the appearance of celebrity Gail Porter, he added: “Having somebody that the youngsters relate to is always a good idea.

“I’m the oldest minister in the Scottish Government, so having Gail Porter here gives relevance which, perhaps, a minister in a suit would not do.”