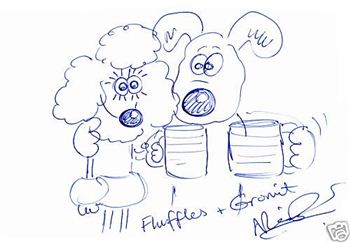 AN ONLINE auction of 35 drawings by comedians and actors such as Stephen Fry, Dawn French and David Jason has raised more than £1,000 for Scots kids.

The kind-hearted stars responded to a call from school children at an Edinburgh school to help them raise cash for new play equipment.

Over 600 celebs were asked to contribute to the worthy cause with over 50 replying with their scribblings to help the kids from Castlebrae High in Edinburgh reach their target.

The most lucrative drawing came from Wallace and Gromit creator Nick Park which raised £237.49.

Other stars to join in the fun included Hollywood A-lister Joan Collins, 60s supermodel Twiggy and the cast of Scottish detective drama Taggart.

The most surprising reply came from former-MI5 chief Stella Rimmington who donated a colourful flower arrangement.

The postcard-sized doodles were exhibited at the artSPACE gallery in Craigmillar and then at a local book shop before being auctioned off on eBay.

Doodles from the Stars was run by Castle Rock Edinvar housing association in conjunction with the high school’s eco-committee over the last year.

Kirsty Croll, Castlebrae’s Eco School Co-ordinator, said: “The whole idea of approaching the stars was all down to the kids at Castlebrae Community High School, along with others in Craigmillar area, they have been participating in a survey of what we should use some of the money raised from the Doodles auction on.

“Our first target is the Hays Estate in Craigmillar and so far 270 young people have commented on what they’d like to see there in terms of new play facilities. We are currently analysing the results of the survey with the help of Edinburgh City Council.

“It was initially designed as a consultation for pupils in the Craigmillar community to help build new facilities for all, through efforts they made themselves. We’re all really proud of the kids and their efforts and they are a credit to the whole of Castlebrae Community High School and the wider community.”

A spokeswoman for Castle Rock Edinvar said: “The charity hopes that the hard work by all involved will be recognised as they start to apply for funding for the Hays Play Area.”