Obama-backed electric vehicle firm to set up shop in Scotland 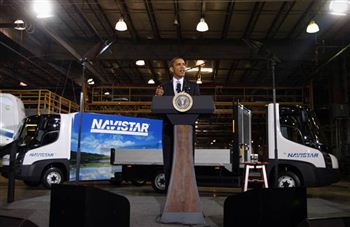 A CUTTING-edge transport firm lauded by US President Barack Obama is to set up a dealership in Scotland selling hi-tech electric vehicles.

Modec – who manufacture a 98 per cent recyclable 5.5 tonne lorry – believe that Scots businesses will embrace their new carbon zero commercial model after the president gave a speech at their US factory last month.

The Coventry-based firm – who have a factory in Obama’s home state of Illinois – got a huge boost from the president after he awarded a $40million to electric vehicle makers in the US.

Now Modec have turned their sights to Scotland – because they are sure it too is ready to go electric.

The firm are aiming their flagship Modec ZEV – which is the largest purpose-built electric vehicle in the world – at councils and businesses looking to find more efficient methods of transporting goods.And they’re hoping the fact that the £30,000 electric battery that it needs costs as much as the vehicle itself won’t put firms off.

The Modec ZEV runs on powerful batteries that enable it to carry up to two tonnes, and only needs to be recharged each night for six to seven hours.

The vehicles can be fitted with batteries that will run for 50 or 100 mile per charge – making them best suited for cities.

But the firm are currently working on a new 250 mile range battery that they hope will revolutionise the image of electric vehicles.

Modec are hoping that the Government will subsidise the cost of vehicle as in Europe, where some states pay 50 per cent of the electric vehicles’ cost.

The Modec was showcased for the first time in Scotland on Thursday by Amey.

The public service firm presented the lorries in Motherwell as part of their new sustainable transport fleet and currently use 15 of the hi-tech vehicles.

He said: “I think businesses in Scotland, like local authorities, will be looking to have a zero emission vehicle like the one we produce.

“Scotland is well known for its Silicon Glen and technology base so it’s good for us.

“And we are at a point where we are hoping to appoint a dealership in Scotland.

“The cost can see quite steep at first but if you look at it from the long term point of view the reliability is rivalled.

“The fact that the engine only has three parts greatly increases reliability and the life of the Modec.

“Also in the continental firms are giving tax breaks to businesses buying eco-friendly vehicles and we’d like to see something like that here.

“What is particularly good about our product is that is it future proof and that while we currently offer two different batteries, we could be seeing a battery that can do up to 250 miles – that is the current aim for us.

“We are currently looking for partners and businesses wishing to step forward and make a change for a more eco-friendly option and with a viable commercial proposition.”

Despite the high cost of the model, Modec have highlighted that the vehicle has a top reliability record due to the fact that the engine has just three working parts, that are ‘sealed for life’ in a container.

Modec are currently setting up dealerships across Europe, and also have a US branch called Navistar.

A spokeswoman for Transport Scotland welcomed the news and praised firms like Amey for operating the new zero emission vehicles.

They said: “We welcome all efforts by our operating companies to reduce the emissions from their operations including the use of greener vehicles and more sustainable construction practices.

“Together with our developing Carbon Management System, we are making real efforts to provide a reliable means of measuring, monitoring and reporting the carbon footprint of all our activities.”

He said: “Having just passed the world-leading Climate Change (Scotland) Act, the Scottish Government welcomes all efforts to reduce emissions, including the decisions by business and enterprise to move towards choosing greener vehicles.

“Such actions to reduce emissions will help Scotland towards achieving its emissions reduction target of 42 per cent by 2020.