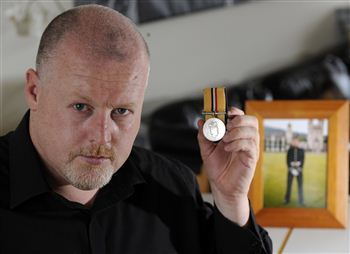 A CONMAN has raided the bank account of a brave Scottish squaddie serving in Afghanistan for a second time – after turning up to the bank wearing full military clothing.

The fraudster – who may be a fellow soldier – fooled bank staff at Abbey in Dundee to break into Private Daniel Lawson’s account.

The 22-year-old’s account was frozen several months ago after it was raided by a thief the first time, but the man impersonating Daniel convinced the branch staff to unblock the account and let him take out £500.

Brave Private Lawson – who is usually based with the Royal Scots Borderers at Dreghorn Barracks in Edinburgh – volunteered to go on tour in Afghanistan to support soldiers that he met from the Black Watch in Iraq.

The Military Police are helping the authorities to investigate the crime – in case the thief is a fellow soldier.He was caught on CCTV in Dundee wearing the military fatigues.

Banking giant Abbey were previously criticised after the first theft from Daniel’s account of £1,625.

Bank bosses said they wouldn’t freeze Daniel’s account unless he called up in person – but he was too busy fighting the Taleban to make the call.

Private Lawson found out that his modest private’s salary had been stolen just after he had been engaged in a ferocious fire-fight with Taleban terrorists.

Daniel’s father John – a Christian missionary worker from Edinburgh – said that he couldn’t believe that the culprit might be another soldier.

He said: “If this is a serving soldier then it’s despicable and cowardly.

“He must know what’s happening to his mates in Afghanistan and he’s back here stealing their wages.

“Taking advantage of a colleague serving abroad would be the lowest of the low.”

A spokesman for Abbey said: “We have recently had monies withdrawn again, fraudulently, from the account of Private Lawson, this time from a different Abbey branch.

“The fraudster has been using genuine ID stolen from Private Lawson, as well as dressing in full military uniform to convince branch staff that they are indeed out customer, and have therefore been able to withdraw funds.

“We have also talked to all of our branches in Scotland to ensure they are aware of this fraudster’s actions and to make sure this does not happen again.

“We have refunded the money taken and we have also given the customer £150 in compensation and refunded the costs of his father’s phone calls.”

Ex-servicemen hope to raise money by driving across volcanoes