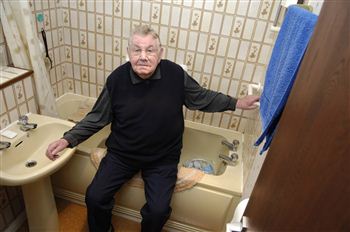 A SCOTS war hero has been left high and dry by his local council despite begging them to help him bathe properly.

Peter Rogan, 86, who has an artificial hip and knees, is currently forced to wash his tiny bathroom sink as Edinburgh Council drag their heels in supplying the pensioner with the support he desperately needs.

The widower, from Prestonfield in Edinburgh, has not been able to have a bath for two months and has been imploring the council for help after his doctor referred him to the city’s social work department six weeks ago.

But after thinking the matter would be solved quickly, Mr Rogan has been told it might now be the end of October before he is given the attention he urgently needs.

In the meantime, the former-Royal Artillery soldier is being forced to wash himself in his wash hand basin.

The veteran, who fought in the battle of El Alamein, has described his plight as “degrading and unhygienic”.

Mr Rogan said: “My reward for being in the Royal Artillery from 1939-45 is to be left feeling helpless and abandoned by those we trust and pay to care for those of us in need.

“I think I deserve better.

“As my legs worsened, my doctor informed social services of my need for assistance in getting into the bath to have a shower, which is situated at the end of the bath.

“I cannot bathe normally without help to get out. At the moment all I can do is wash myself with water from the hand basin.

“I’ve bought a wee jug to wash my hair but it splashes everywhere and doesn’t do the job properly.

Mr Rogan, who is forced to take a cocktail of drugs to quell his pain, was first contacted by social services on August 19 informing him they would be in touch, but despite numerous calls to tell them of his increasing difficulties he has received no response.

He only discovered the waiting period had been extended to eight weeks after he called a complaints hotline after waiting for help for four weeks.

Mr Rogan, a retired bricklayer, also revealed he forged his age in order to serve his country.

The brave hero was just 16 years old when he joined his local Royal Artillery battery in 1939, but informed his superiors he had recently turned 17.

Mr Rogan was initially sent to Thirsk, North Yorkshire, for training, but was soon heading to the Shetland Islands after the Germans invaded Norway in case the north of Scotland was attacked.

He said: “I was a bit cheeky in signing up. I was in the TA’s and was desperate to serve my country so I went to my local office and told them I was 17. Nobody asked to see any documentation and they took me right away.

“Although I was young I fitted in well with the other lads, and to be honest I wasn’t the only one to have lied about my age.

“It was just the done thing at the time. Our country needed us to fight the Germans and we were only to keen to help out.

The father-of-two added: “I’m not asking for the world, all I want is decent standard of care. I need a professional therapist to help me around the house – I’ll even pay for it myself.

“By the time I get the necessary help I could be in an even worse state.”

An Edinburgh Council spokesman claimed the authority was aware of Mr Rogan’s problems and they were in contact with him to arrange an assessment.

He said: “While we sympathise with his situation, unfortunately, there is a great deal of demand for those services especially at peak holiday periods and due to limited resources we cannot assess everyone as quickly as we would like.”