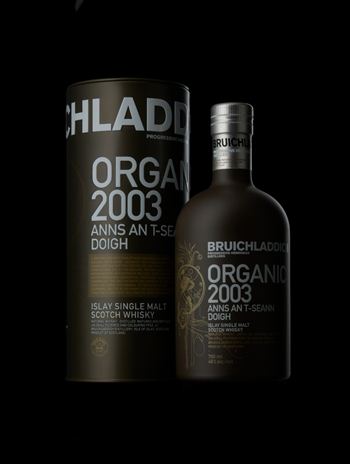 Bruichladdich Organic – believed to be the only organic single malt in continuous production – comes from a single variety of barley, from a single farm, in a single year.

The privately-owned distillery has labelled the whisky “Anns an t-seann doigh” – Gaelic for ‘the way it used to be’.

Distillers say that this is a return to the way that whisky was made 200 years ago and reckon the taste is so unusual that experts won’t even know which country it’s from.

Mark Reynier, managing director of Bruichladdich, said: “Whilst we think we’re being really progressive if you go back 200 years, everything was organic.“I come from a wine background and I’ve seen the difference in the quality of the grapes in organic farming.

“We have 23 farmers in Scotland growing organic barley for us, but each edition of this whisky comes from just one farm in one year – making is the ultimate single, single malt.

“In this whisky you really taste the barley, and you don’t find that in single malt much now.

“We’re a small private companies and we can do these things and this is a real landmark for us.”

The current edition, which is in the process of being bottled this week, is distilled from Chalice barley grown by William Rose at Culblair, near Inverness in summer of 2003.

Bruichladdich, which was relaunched in 2000 after being closed for six years, has released a number of unusual takes on the traditional Islay single malt.

These include a bourbon edition and a single malt called Infinity – with a specially designed long-lasting taste.

Their X4 edition, which featured in BBC2’s Oz and James Drink to Britain, is said to either make the drinker immortal – or kill them.

The world’s first organic single malt was first bottled in 1992 by Springbank.