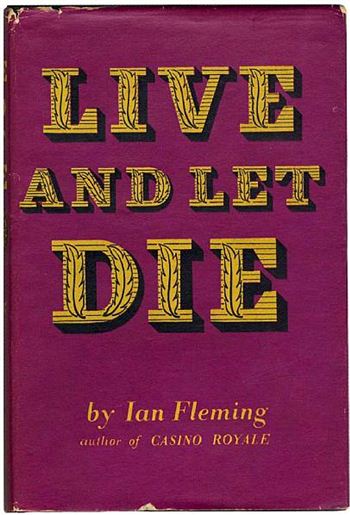 A RARE first edition copy of Ian Fleming’s Live and Let Die has turned up in a bin bag at a charity shop – the second time a Bond book has scooped the store a fortune.

Staff at the Oxfam bookshop in Edinburgh spied the rare 007 thriller – first published in 1954 – in a bag of donations.

They couldn’t believe their luck when they fished out the Scots author’s second novel.

The novel – which was made into the first Roger Moore production in 1973 – is due to go under the hammer at Bonhams in Oxford next week and is estimated at £800.

But its good condition could see it fetch far more.Last week, a first edition copy of Fleming’s Moonraker – in poor condition – was sold to a private bidder for £1300 at Lyon & Turnbull in Edinburgh.

Bookshop manager Andy Crosby said: “007 seems to bring a bit of luck to our shop.

“We don’t know who donated the book but I would like to thank them very much for their extremely generous donation.”

The book is the second Bond novel to make the shop a packet after first edition of From Russia With Love, worth £300, turned up last year.

Live and Let Die is often considered the most controversial of the Scots author’s books due its depiction of Afro-Caribbean people and voodoo practices.