Mercy crews under more attacks than ever

MORE violent yobs than ever are being convicted for attacking Scotland’s hero emergency workers. 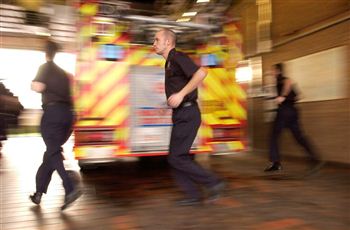 Tough new rules were introduced in 2005 to protect mercy staff from the daily possibility of being assaulted.

Union leaders said the figures should encourage response workers to have confidence in reporting violence to police.

Attacks on brave firefighters, paramedics and other emergency staff resulted in 78 court cases in the Lothian region alone between April 2008 and March 2009.

That compares to just 28 in the first year after the Emergency Workers (Scotland) Act began.

The legislation made it a specific offence to assault, obstruct or hinder someone providing an emergency service.

“Full force of the law”

Now many frontline workers at Scotland’s NHS hospitals have to be trained in self-defence and restraint techniques.

The Scottish Government said it was vital police, fire and ambulance workers were able to carry out their duties without fear of attack.

They said anyone who wilfully obstructed them would be subjected to the “full force of the law.”

The Royal College of Nursing Scotland’s Norman Provan said: “Violence and aggression are completely unacceptable and there are no excuses.

“I encourage all nursing staff to report such incidents and their employers must also take responsibility for the safety of their staff by ensuring that these crimes are reported to the police.

“Everything must be done to deter the public from carrying out threatening or violent acts.”

Unison said they would not be satisfied until attacks on their members were wiped out completely.

A spokesperson for the health care union said: “Public service workers should not still have to face violence at their work.

“Police having to attend hospitals are an indication that we are not getting to grips with this problem.”

Labour MSP Hugh Henry added: “It is sickening that emergency workers are subjected to violence and abuse.

“Those people who inflict violence on emergency workers should be warned that if they do so, there will be a very severe penalty.”

A spokesperson for the Scottish Government said that as a result of violence towards fire crews across the country, a new communication system was being installed in all vehicles that could summon urgent police assistance when required.

They said: “We condemn without reservation such mindless thuggery and we would encourage the courts and judicial system to use the full force of the law to clamp down on such behaviour.

“The Scottish Government believes that all workers should be able to go about their work without fear of attack or intimidation.

“It is absolutely crucial that every member of our emergency services can carry out their jobs free from assault, obstruction or any other hindrance.

“The new Firelink communications system which is currently being installed in all Scotland’s fire appliances, includes a priority call function that enables fire crews to request urgent police assistance should they be attacked.

“This is a clear signal of this Government’s commitment to ensure the safety of those responsible for protecting our communities.”