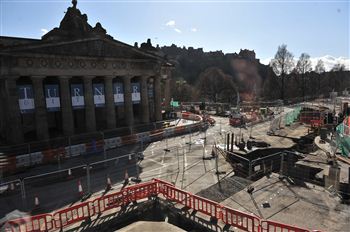 ONE of Scotland’s major high streets has seen its value drop by a whopping ten per-cent due to a massive road works project, coupled with the recession.

The average yearly rent on Princes Street in Edinburgh fell by 10.6 per cent over the last 12 months, while Glasgow’s Buchanan Street fell just three per cent.

The value of the main street – which includes Jenners department store and the five-star Balmoral Hotel as tenants – has fallen rapidly, while Buchanan Street broke into the UK’s top ten for street value.

The slump was blamed on the large-scale tram works programme leaving the capital’s city centre congested.

As a result, several big discount firms are set to move into the historic street, home of the world famous Hogmanay party.Now easyHotel – famous for their trademark bright orange themed branding – are bidding to move into the heart of the Edinburgh’s main street with a 30-room development.

They plan to offer rooms for as little as £25 per night.

And several other discount chains are setting up near Princes Street on Leith Walk.

Retails bosses last year warned the street could be taken over by tartan tat stores blasting out bagpipe-rock to lure in tourists.

Stuart Moncur, head of retail at Cushman & Wakefield in Scotland, said the tram project has given the city’s main street a bad image for investors.

He said: “The building work is unfortunately giving poor impression to potential tenants and many retailers are stating that they would rather wait and see how the city centre will function once the tram works are complete.

“Even those visiting the city centre are now reluctant to make a long-term commitment.”

He said: “You can’t put that down to the tramworks on its own, but the tram has not helped, that’s for sure.

“There is absolutely no doubt the tram works are having a major impact on retailers’ sales on Princes Street – how can they not?”

Mandy Haeburn-Little, director of customer services at the Edinburgh Tram Project, insisted retailers would reap the benefits of the trams once construction is complete.

She said: “The economic benefits are expected to far outweigh short-term disruption and the scheme is already attracting developments along the route, notably the investment in the St James Centre.”

Retail space on Princes Street is £210 per square foot, compared to Buchanan Street’s £260.

The UK leader is currently New Bond Street in London, which is £775 per square foot and home to exclusive Chanel and Rolex boutiques.