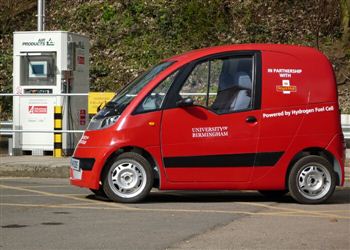 TRADITIONAL red Post Office vans are to turn green on a Scots island.

If a trial of a new breed of hydrogen-powered post vans proves successful on the Isle of Lewis, they could be rolled out across the UK.

The tiny vehicles can only cover up to 135 miles on a full tank of hydro-power, derived from human waste.

But they tick all the eco-friendly boxes producing zero CO2 emissions, even at a top speed of 50mph.

Designed and built by Microcab at a cost of £100,000 each, the Royal Mail transit vans are set to arrive in Stornoway in November for a six-month trial run.The vans will use hydrogen from a local biogas plant in the Outer Hebrides which generates power from domestic waste.

They will therefore be a zero carbon operation as well as reducing methane emissions to the atmosphere.

He said: “We clearly see hydrogen fuel cell technology as the future means of small and medium vehicle propulsion in the not too distant future.

“It is now just a question of seeing which one of the major motor manufacturers can bring such fuel cell commercial vehicles to market in large numbers and reasonable prices first.”

Western Isles Council is assisting the trial by providing the hydro equivalent of a petrol refuelling pump.

After the trial run on Lewis, Royal Mail will draw up a blueprint for manufacturers to bid for design and construction contracts.

The same Microcab hydro-power vehicle is currently being tested on Birmingham University’s campus, delivering post to resident students in halls.

The cars are also being studied by the university’s School of Chemical Engineering to find out more about the viability of hydrogen in transport.