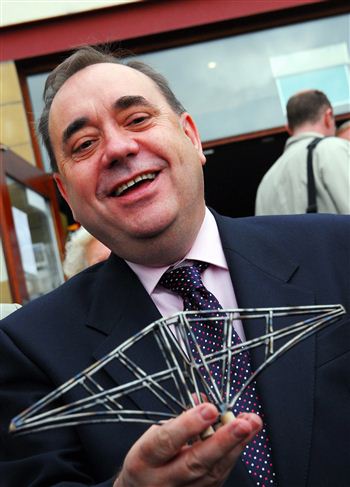 FIRST Minister Alex Salmond is under pressure to repay over £1000 after he stayed in London hotels while also renting a flat in the city.

The Scottish Government leader’s hotel bills were revealed in a parliamentary question tabled by Jeremy Purvis of the Lib Dems.

He has written to Salmond for an explanation, but a spokesperson for the SNP leader said the hotels were used “for many business meetings, as well as for accommodation.”

But opposition MSPs are angry that Salmond didn’t just use the flat in London’s plush Dolphin Square area, for which he was charging £14,000 per year to the House of Commons.

Newly released figures show that after becoming First Minister in May 2007, Salmond billed the Scottish purse £1,094 for staying in London hotels on government business while his own flat lay empty.Mr Purvis said: “As the person ultimately responsible for looking after the public purse in Scotland, it was incumbent on him to realise he could have saved money if he had stayed at his flat.”

She asked the SNP leader to publish his diary for the spell, adding: “There are doubts over how much time he actually spent in London during that period that would justify such a large claim.”

He refused to disclose his diary and last night Goldie’s deputy Murdo Fraser asked whether there were more “embarrassing revelations” in the woodwork.

He said: “Alex Salmond constantly spends taxpayers’ money hand over fist – on himself.

“Whether it is his food expenses at Westminster or the extra money he is making from being First Minister, an MP and an MSP, he has continued to take the taxpayer for a ride.

“Now we hear that our First Minister is asking the taxpayer to pay twice when he stays in London – for a plush hotel and his plush apartment.

“How many more embarrassing revelations are there?

“Alex Salmond takes his MP’s salary and his First Minister’s salary worth nearly £150,000 a year, whilst hardly ever carrying out work at Westminster.

“To make us pay twice for his fleeting visits is adding insult to injury.”

Responding to the allegations, a Scottish Government spokesperson said hotels were used because Salmond had a team of civil servants in tow on the specific London jaunts.

They said: “These were the occasions when the First Minister was in London on official ministerial business, with the support of a full civil service team and back-up.

“The hotels were used for many business meetings, as well as for accommodation.

“This would not have been possible in the rented flats at Dolphin Square.”