Residents of Kirkcaldy, Fife, watched his speech at O’Connell’s bar – and most said they were unimpressed.

Jim Lynch, 51, said that he would have liked to have seen Brown address the war in Afghanistan.

The science and engineering trainer, a Kirkcaldy local, said: “Whenever something happens in the world Britain always gets involved.

“I think a lot of people have been left asking why we are there in the first place.

“I would have liked to have seen him talk about the issue properly, and maybe promise that more of that money would be spent here at home.” 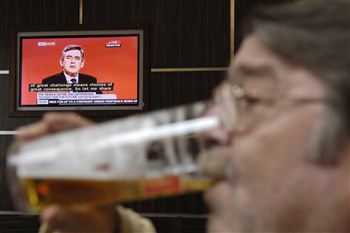 Speaking to Labour delegates in Brighton he recalls Labour’s response to the economic crisis, saying he had acted “decisively and immediately.”

But retired lecturer James Edwards, 60, said that he shouldn’t have been challenging Tory leader David Cameron in the first place.

James, who lives in Kirkcaldy said: “I’d have like him to have been honest about his difficulties – both with his health and with his administration.

“What I would have preferred is for him to have stood aside and allowed the home or foreign secretary to take the platform.

“There are people who could lead the party so much better.”

Right man to do the job

But Jimmy Reekie from Kirkcaldy said: “I’ve been listening to Mr Brown’s speech here today and I’m quite happy with it, as a matter of fact.

“I think we should give the man a chance – he’s the right man to do the job.

“Some of the criticism has been absolutely pathetic, these people clearly don’t understand politics.”

64-year-old Jimmy, who is retired, added: “There’s a lot to be done in the country, and this speech has certainly helped to convince me that he’s the right man.”

28-year-old Fiona Watson, a customer advisor with Dunfermline Building Society, said that she’d have liked him to promise to do more for Scotland.

Fiona, from Cowdenbeath, said: “He should have promised to do more for people up here.

“It’s just like when Dunfermline Building Society collapsed – he just did nothing.

“And the way this country is going right now we need someone with a bit of oomph.”