Members of the public given chance to be anti-terror agents 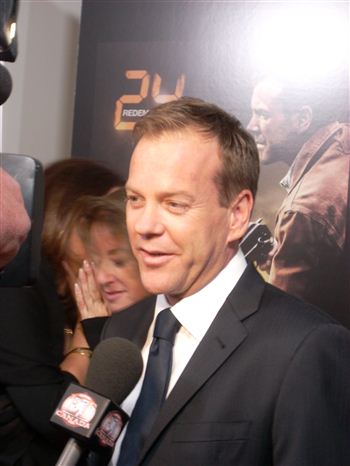 WANNABE anti-terror agents are being given the chance to be Scotland’s answer to 24-star Jack Bauer — in a new scheme being run by police.

Participants play the part of a Counter Terrorism Officer set in the high pressure aftermath of a devastating terrorist attack on Edinburgh.

And the new recruits will have to make life or death decisions on how to control the situation in the role playing exercise.

The bizarre events – the first of which took place last night at the City Chambers – involve actors playing police chiefs and top spooks who will brief the agents on the ongoing situation from large screens.

The scenario will be played out in real-time like the explosive US TV drama 24 – known for its staggering series body-count.The show features ruthless Counter Terrorism Unit agent Jack Bauer hunting down fanatical bombers and sleepers cells.

The events, run by Lothian and Borders Police, are intended to increase local communities resilience to violent extremism and to give residents an insight into how a terrorist-related investigation is carried out.

One member of the public who attended a pilot session said: “The exercise suddenly puts you on the other side of the table and gives you an insight as to the challenges and decisions that the Police have to make each day.

“It certainly stresses the importance of regular interaction between both the police and the local community on a day-to-day basis.

“I would encourage as many people to attend as possible – it’s well worth the time.”

The event involves six teams of six agents, who must make snap decisions on how to handle the problems that arise during the investigation from a virtual command unit.

They will also face the brunt of the media frenzy in the aftermath of the attack and agents are grilled by actors playing reporters and live TV crews who are hungry for information on the attack.

Superintendent Mark Williams, counter-terrorism chief for the City of Edinburgh, says it’s a good way for the public for understand how the police investigate cases in difficult circumstances.

He said: “We hope that these exercises are invaluable in educating members of the public about the realities of terrorism and showing them the sorts of problems and dilemmas that we face in dealing with any incidents.

“We have been really encouraged by the popularity of these events, and hope that they reinforce our aim of creating safer communities throughout the Lothian and Borders area.

“Also with these workshops we provide an environment in which the local community and the police can meet and discuss how we can work together.

“While there are no specific threats of terrorism within the city at present, the national threat level remains high, and so Lothian and Borders Police are determined to remain prepared.

“This sort of event is critical in building community confidence and understanding of the job we do.

“And it gives people an real insight into the difficulties that the police face in this kind of investigation.

“We look at the decisions that each group took and how it affected various people and it really does give you a flavour of how challenging and dynamic an investigation like this can be.”

The events are part of the national anti-terrorism awareness programme CONTEST, which aims to prevent attacks, prepare people for possible incidents and pursue those linked to any attack.

Superintendent Williams said the event is also good fun and groups of friends go along for an exciting evening.

He added: “You do get carried away in the scenario and you do get put under pressure, but it’s also a fun exercise and the people who took part really enjoyed it.

“Towards the end we introduce the media and we do live interviews with TV cameras with the players, and people have really enjoyed that.

“At the end people had a much better idea of the process of an investigation and the difficulties the police face.”

Top golf course releases details of improvements ahead of championships