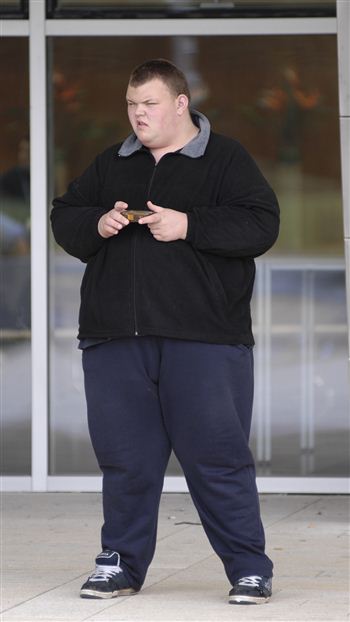 A ROLY poly knife yob who faced jail if he proved too fat for community service has been spared a prison sentence after his doctor said he was fit for light work.

It was feared tubby teen Liam Johnston would be unable to carry out community service after he admitted a bust-up with cops where he threatened them with a knife.

But he was ordered to carry out 150 hours of unpaid work after his legal team presented a letter from his GP saying he was able to work – as long as it was not hard physical labour.

Fiscal depute Danielle Clark told the court how Johnston went berserk outside his home in Livingston’s Mowbray Rise on June 1 this year.

Police arrived to find Johnston standing in the street with a knife.

The 18-year-old attacked two police officers after downing what was described as “a heroic” amount of alcohol during the binge.

Last month he admitted assaulting the officers and also a breach of the peace during a hearing at Livingston Sheriff Court.

Sentence had been deferred on the man-mountain because it was feared he was too fat to do community service.

Miss Clark said: “At about five to midnight police officer were requested to attend at the accused’s residence.

“On arrival the accused was seen standing in the road with a blue handled knife in his hand.

Miss Clark said the two male officers were forced to drive away from Johnston – who began shouting and swearing – to dodge his attack.

But they were able to take down the obese teen with two doses of CS spray.

Johnston’s solicitor, Peter Mullen, said his client had downed two litres of spirits as well as taking shots of other drinks before the rampage.

Mr Mullen said: “On the occasion in question he had consumed a heroic amount of alcohol.

“It was quite a terrifying amount of alcohol.”

Mr Mullen added that Johnston – a first offender – had cut down on his excessive boozing in a bid to stay out of trouble.

He said: “This is the first and only occasion that he has acted in such a way. He stopped drinking to such an extent following the commission of the offence.

“The last time he consumed alcohol was last week when he was drinking with his mother.”

Mr Mullen also produced a letter from Johnston’s general practitioner insisted he was fit to carry out community service.

Sheriff Douglas Kinloch said he could spare Johnston from a jail sentence because of the medical green light.

Sheriff Kinloch said: “This is quite a worrying incident where you were brandishing a knife at police officers.

“If you don’t it is going to get you into more trouble.

“You are fit for unpaid work, your doctor suggested that it would be preferable that it is not hard physical work.

“I’m sure there are other ways you can benefit the community.”