The wrinkly rocker has “accepted the fact it is never going to go away,” but says he still struggles with a “lack of self-esteem” when it comes to putting down the bottle. 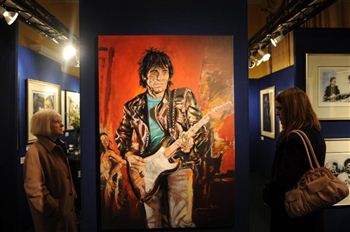 The 62 year-old granddad guitarist opened up about his struggle with booze in a weekend interview.

And he says sticking with his 21 year-old Russian girlfriend Ekaterina Ivanova makes him feel like “a permanent teenager.”

The Stones stalwart shrugged off reports he was trying to win back his ex-wife Jo after dumping her last year.

Neighbours claimed Wood and Ivanova had a blazing row last weekend which ended with her threatening suicide.

Wood admitted there had been “harsh words” between himself and Ivanova at their mansion in Belsize, Surrey, but denied reports the pair were splitting.

He said: “There were a few harsh words that night between me and Kat but the point about Belsize is it’s like an echo chamber.

“You raise your voice and the neighbours hear everything.

“If we have another argument, this time we’ll have it in the middle of a field.”

He met the girl 42 year his junior in 2008 after a shock separation from his wife Jo, who is currently starring in BBC’s Strictly Come Dancing show.

Wood insists the pair have “moved on.”

He said: “I’m a permanent teenager. The older I get, the younger I get.

“Me and Kat, it’s been this great adventure and I’m having fun.

But he admits he is struggling to move on from alcohol.

He said: “I tried to have a drink but I can’t find a balance.

“When I do, Mr Hyde comes out, and the older I get, the worse I get.

“I suppose once you accept the fact it’s never going to go away then it’s easier to live with.

“But a lack of self-esteem, that’s always been my biggest problem. Always putting myself down.”