Before launching her worldwide empire of floral-print shops, the Queen of kitsch was hit by a brutal cancer that deprived her of the chance to have children. 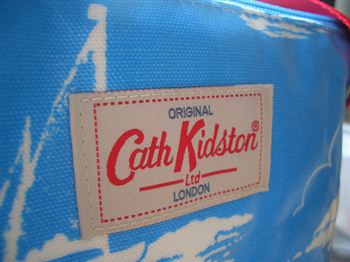 But she says the deadly disease helped her avoid bankruptcy and sparked her imagination to launch a business which now rakes in a staggering £31.3 million per year.

She believes her crafty firm is riding the wave of the recession because people are being forced into DIY and making or adapting their own clothes.

The 50 year-old, whose dad Archie was chairman of the Clyde Shipping Company, launched her self-named company after losing both her parents to cancer.

Speaking in a weekend interview she said: “I don’t have debt, I couldn’t have the stress of it.

“When I had cancer I decided to avoid that. A lot of people would say it’s foolish not to have debt and that I grew slowly as a result, but I didn’t set out to make a fortune.

“I wanted to earn a living and enjoy what I do. The fact the business is very successful is phenomenal.”

It was while battling cancer that Kidston decided life was too grim to feature anything but brightly-coloured polka-dot aprons and cheerful homeware in her stores.

Breast cancer saw her undergo an emergency mastectomy in her mid-thirties.

She said: “That was very much a positive that came out of something negative.

“With cancer we have no idea when it might come back again. I thought, if anything happens to me I don’t want to feel haven’t really lived my life to the full and taken risks.

“I thought, to hell with it, how will I feel in five years time if I don’t do it.

“Both my parents died of cancer that was inoperable, so when you’re told you have breast cancer and you can do something about it that’s not so terrible. If you go through something painful, it gives you strength.”

Kidston lists Glasgow’s Tam Shepherd’s Trick Shop as her favourite store, having stopped off there to buy whoopee cushions and fart gas every summer during childhood holidays.

She said: “The best outing is to go there and stock up. We always used to go when we went to Glasgow.

“I’m very proud of my Scottish roots. There’s a Scottish side to me I wish I was more drawn to because I’m a bit extravagant.

“I was so proud of my dad and he was such a lovely, funny man.”

Cath Kidston Limited now has 34 shops worldwide including two in Tokyo, one in Osaka and another due to open in Heathrow airport.