ANGRY Scots students have hit out after it emerged nearly 20,000 still haven’t got their bursaries – one month into the term. 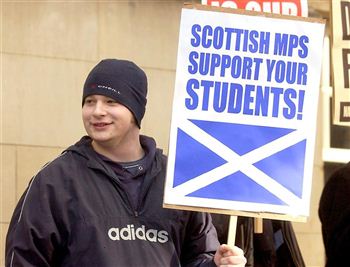 Delays in processing a record number of applications mean the vital cash lifeline needed for rent, food and books is long overdue.

The Student Awards Agency of Scotland (SAAS) also blamed the postal strike for the delay.

But it has left some students worrying about cash just weeks after starting university.

One nursing university student from Edinburgh said: “I applied for mine two months ago because I wasn’t sure if I was getting in or not.

“As soon as I found out I had a place on the course I applied for the money, but obviously the system isn’t joined up well enough to cope with late applicants.

“Now I’m scared I’ll have to live on the bare minimum just to pay my rent, because if I miss that I’ll lose the flat.

Another university fresher, who also asked to remain anonymous, said: “I got an email from SAAS this week saying I had been accepted for the bursary and can expect the money within a week.

“It is good to know you’re getting the money eventually, but if I had known it would be such a long wait then I might not have bothered.

“It’s been really stressful trying to budget what little money I’ve got without knowing how much I can really spend.”

A spokesperson said: “Continued investment by SAAS in staff and systems means that SAAS is currently processing almost all applications, 117,500 to date, within target, where those applications are correct and complete.

“SAAS is aware of the ongoing disruptions to postal services and that it may be taking longer than normal for students to receive their award letters.”

They advised any students who are worried about their bursary to only contact them 28 days after applying for cash.

They added: “If students have applied very late to have their funding in place for the start of term – within three weeks of their course start date – SAAS will process these applications as soon as possible, but these students should approach their college or university for assistance from their discretionary funds in the meantime.”

How to prepare to study in Canada?

Best universities for finance masters around the world