THE project director for a £2.3 billion bridge in Edinburgh will be based 50 miles away in Glasgow. 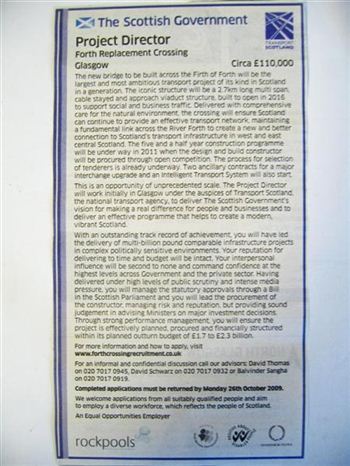 A job advert for the £110,000 post has come under criticism for stating that the new Forth road bridge boss will be based in the West of Scotland.

Edinburgh MSPs slammed the Scottish Government, saying the new bridge chief should be based on-site.

But Transport Scotland said the director will “eventually” end up in the East coast.

The job of heading up the massive project is described as an “opportunity of unprecedented scale.”

The director must deliver a 2.7km bridge in time for opening in 2016 under “high levels of public scrutiny” and “intense media pressure,” according to the advert.

Opposition politicians are united in their belief that the bridge boss should work close to the crossing.

Margaret Smith, Liberal Democrat MSP for Edinburgh West, said: “Clearly, I would expect the project director for a project of this size to spend a fair amount of their time on site.

“This is the biggest infrastructure project Scotland has ever seen.

“It can’t really be handled from 50 miles away.

“It’s a Transport Scotland post, so they will have to be spending part of their time in Glasgow.

“What we would expect is somebody not spending all their time behind a desk in Glasgow but actually here on the ground.”

The Conservatives’ Lothian MSP Gavin Brown said: “I’d have thought a project director needs to be on the ground as much as possible, particularly given the concerns of residents on both sides of the Forth.

“I would describe the handling of the project so far as patchy.

“They have done some things fairly well, but have been criticised by residents’ groups.

“Some of the engagement could have been better.”

The decision to use an English headhunting company – London-based Rockpools – to lead the search, instead of a Scottish firm, also came under fire from Scottish Tories.

A parliamentary bill signalling the start of construction is expected to pass this year and building is scheduled to begin in 2011.

Last week it emerged the contract to build the bridge had attracted just two potential bidders.

“As the project moves towards delivery, it is likely the project director and his team will spend a significant amount of time in Edinburgh and eventually on site, both as the bill is guided through the parliamentary process and as construction progresses.”