A GREEDY former lawyer has been jailed for three and a half years for taking almost half-a-million pounds from a dead pensioner’s will and using the cash to pay off his own debts. 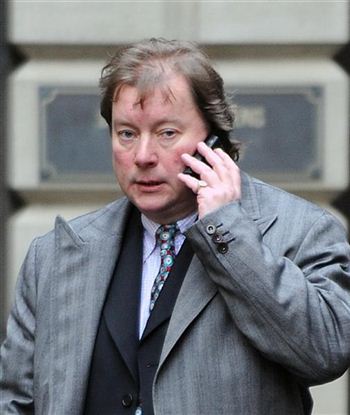 Sentencing him at Edinburgh Sheriff Court yesterday (Mon) Sheriff Derrick McIntyre said: “This was a grave breach of trust.

“The public are entitled to expect people like you acting in a position of trust to display the utmost integrity and you have clearly failed to do so in this case.”

Miss Hampton had worked in Edinburgh as a teacher all her life, leaving the huge sum of cash in her will to her cousin’s daughter, June Pirie.

But before Mrs Pirie even knew about the fortune left for her, shady Karus had already used it to settle debts in his own law and property firms and even paid off a personal credit card debt.

It was originally thought that the Cancer Research charity was entitled to the huge sum left in Miss Hampton’s will.

“No option” but jail

But it was only when the charity began to investigate that it emerged she had drawn up a second will for the money to be given to Mrs Pirie, which Karus claims he knew nothing about.

He handed over £500,000 in court last week to be given to the genuine beneficiary of the will, but Sheriff McIntyre insisted he had no option but to jail him.

Karus, a father of one from Edinburgh, was arrested in March last year having previously been suspended by the Law Society in 2001 for “financial irregularities”.

Fiscal Depute Alison Smith said previously: “Miss Hampton was a single lady with no children who worked as a teacher throughout her life and lived in Edinburgh.

“She signed a will in September 1992 which left all the money to Cancer Research.

“Then in 1999 she left a will to June Pirie, her cousin’s daughter.

“When Mrs Hampton died in 2003, Michael Karus registered the 1992 will and signed a confirmation that there were no other wills.

“He did not contact Cancer Research and proceeded to transfer the money into accounts he had access to.”

These included a property company he was the director of, the Karus and Co. pension account and even a personal credit card in arrears.

Despite the fact he had channelled the cash into his own account, Karus met the intended beneficiary, Mrs Pirie, at Mrs Hampton’s funeral and said it had gone to charity.

Mrs Smith added: “Mrs Pirie had no idea of the will left in her favour.

“She met the accused at Miss Hampton’s funeral and he told her some of the will had been left to charity.”

It wasn’t until 2007 when Cancer Research workers were investigating that they discovered they weren’t in fact the beneficiaries, as there was a second will leaving the cash for Mrs Pirie.

Defence QC Ian Duguid had claimed that Karus did not know about the second will until it was too late.

He said: “The first will was registered by him in 1992 as the sole executor in good faith.

“Mrs Pirie has not received any of the inheritance but she will be reimbursed in the fullness of time, along with around £80,000 to account for interest. The money has been paid to the Crown.

“So as much as she has been out of pocket for a number of years, she will be reimbursed.”

Standing before Sheriff McIntyre in a tan trench coat yesterday, Karus was told: “You pled guilty to the embezzlement of just over £400,000 from the estate of an elderly lady who died on 5 May 2003, and you were acting as her executor.

“Such is the gravity of this offence that in my view there can only be a custodial sentence.”

He said Karus would have been jailed for the Sheriff Court maximum of five years, had he not entered a guilty plea before trial and paid the money back.

Shamed Karus, who lived in Edinburgh’s New Town, pleaded guilty to embezzling the cash between March 5 and May 7 2003.

His defence argued that at the time he had been in the midst of a bitter divorce battle and that his mother had been ill with dementia. They said Karus and Co was also in the hands of a judicial factor during the same period.

It was a spectacular fall from grace from the man who joined the firm, first started by his Polish immigrant father, in 1986.

His father died in 2001 and Karus took over.

He allegedly boasted of being a “shark” who preyed on the vulnerable and named two of his firms GWS (Great White Shark) and Mako after them in celebration of his predatory style.

But he landed in hot water in November that year when the Law Society received reports of “financial irregularities.”

He was found guilty by the Scottish Solicitors Discipline Tribunal (SSDT) of professional misconduct for breaching accounts rules and restricted to acting as a supervised assistant on 14 December 2001 for five years.

Two years later he was censured and fined by the SSDT for breaches of the Law Society’s accounts rules.

But he ignored the suspension and carried on working as a principle solicitor until being caught again by the SSDT in July 2005, when he was suspended from practising as a solicitor for a further10 years after being found guilty of professional misconduct.

Philip Yelland, director of Regulation at the Law Society, said: “Solicitors are expected to maintain the highest standards both in their professional and personal lives.

He said: “Honesty is paramount in solicitors’ dealings with their clients. Mr Karus has clearly breached this fundamental principle of being a solicitor.

“Once the Society has official notice of his sentence from the courts, we will be able to raise a formal complaint against him to allow us to prosecute Mr Karus before the Scottish Solicitors Discipline Tribunal.”

Specialist fraud detectives were involved in bringing Karus to justice, and Scott Pattison, the Crown Office director of operations, said any others will be pursued.

He said: “Michael Karus abused his position as a lawyer and the trust placed in him by Edith Hampton in order to steal her life savings, which amounted to over £400,000.

“Ms Hampton entrusted him to ensure that her property was passed on according to her wishes; but he took advantage and took this money for himself.

“This was a very serious breach of trust. The case was dealt with by the Crown Office specialist National Casework Division who worked together with the Lothian and Borders Police specialist fraud unit.

“This case shows that those like Michael Karus who use their professional status to perpetrate crime will be made to face justice.”