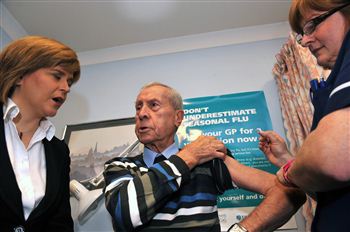 A FLU jab expected to save thousands of lives was launched yesterday to reduce the number of people affected by bouts of winter flu.

Deputy First Minister Nicola Sturgeon visited elderly and vulnerable individuals being inoculated with the seasonal flu jab and encouraged those at risk to come forward to accept the free vaccine.

The yearly programme is promoted to ease the strain on hospitals, as well as to ensure that vulnerable people are protected from flu, which evolves in its form each year.

Every winter one million doses of seasonal flu vaccine are made available to those aged 65 and over and those deemed ‘at risk’, as well as healthcare staff.

Speaking at the Davidson Mains Medical Centre in Edinburgh, Nicola Sturgeon said: “Having flu is never pleasant but most people make a quick recovery.“However, some people are more at risk of complications and for them flu can be very serious – or even fatal.

“That’s why it’s important that people who are entitled to a vaccination – such as older people or those with chronic breathing and heart problems – come forward to get it.”

However the deputy leader – who also heads up the Department of Health -highlighted the fact that the seasonal inoculation would not protect people against swine flu.

She urged those vulnerable to illness to arrange to have anti-swine flu jab, which will be issued in a few weeks.

She said: “While this simple jab will provide protection against seasonal flu it won’t protect against the pandemic H1N1 strain.

“The H1N1 vaccine has now been licensed and the vaccination programme for priority groups will start shortly, as soon as supplies are delivered.

“Again, I would urge everyone entitled to receive a vaccination to ensure they come forward – it’s the easiest way to protect yourself and others.”

So far 10 people have died of swine flu in Scotland, with the total for the UK standing at 85 deaths since the outbreak.

The swine flu jab, which was approved at the end of last month, is intended to prevent the spread of the H1N1 influenza during the winter months.

Scotland’s healthcare services are expected to be hit hard in the months to come.

Two weeks ago the Edinburgh Royal Infirmary announced that they would be moving hospital beds into former offices to cope with the expected demand this winter.

And the hospital has already had to keep their winter ward – used to deal with the number of elderly people affected by flu – open all year.

The Chief Medical Officer for Scotland, Dr Harry Burns, added: “For people who are at risk of developing serious complications if they get flu, getting vaccinated is the best way to protect themselves.

“Seasonal flu is a serious illness and we should not underestimate the potential consequences.

“I would urge everyone who is entitled to receive a flu vaccination – whether for seasonal or H1N1 flu or both – to do so as soon as possible.”