Ex Hibs and Arsenal striker red-carded from the roads

FORMER Hibs frontman Dean Shiels has lost his driving licence after running a red light in his convertible Mercedes. 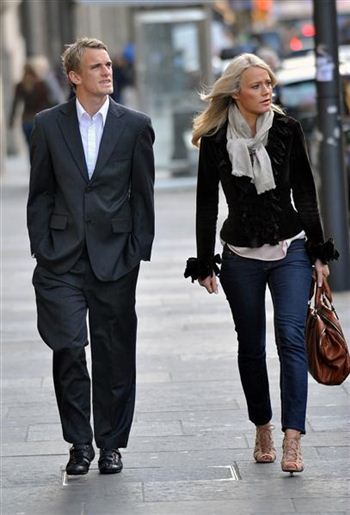 The 24-year-old ignored a red light in the capital’s London Road in July 2008, before his move to Doncaster Rovers during the January transfer window.

He initially denied passing the red light as he thought his blonde girlfriend might have been driving the car.

But the Northern-Ireland striker travelled back to Edinburgh yesterday (Wed) to admit the charge at Edinburgh Justice of the Peace Court.

He was fined £160, with his defence agent saying he “certainly has earnings” to pay it.

Shiels claimed he had “no particular recollection” of passing the traffic light on London Road, close to Hibs’ Easter Road stadium.

But he apologised for his error and got a lift back to Doncaster with his dad and girlfriend, who were by his side at court.

Fiscal Depute Lisa Welsh said: “The charge speaks for itself.

“Mr Shiels was issued with a fixed penalty and it was returned as unpaid on September 19, 2008.”

“The situation is at the time he was working in Edinburgh as a footballer.

“He was offered a fixed penalty and I understand there was some debate as to whether he was the driver or his girlfriend.

“There was some investigation and Mr Shiels has come to accept it was him.

“He has no particular recollection of the incident.

“It was simply an error on his part for which he apologises.

“He is now playing for Doncaster Rovers and certainly has earnings with which he could pay a fine.

“Unfortunately he will lose his licence as a new driver and will have to resit his test, so again that is further punishment and a reminder that he must take greater care in future.”

Justice Chris Paterson told him: “As your solicitor has already explained, you are going to lose your licence, which is most unfortunate.”

Shiels made 145 appearances and scored 31 goals for the Easter Road club before his move to the English Championship outfit.

Justice Scales New Heights As Thief Gets To Repay Cash