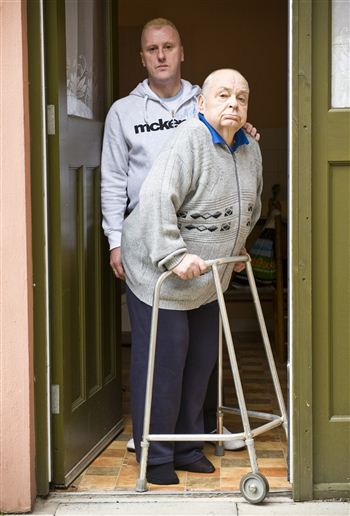 A FRAIL pensioner said he has been made a prisoner in his own home by yobs thought to be as young as just SEVEN.

Graham Bilsland, 72, said he has been subjected to a life of hell for three weeks by an 18 strong gang of teeny terrors throwing bricks and screaming abuse at his home, day and night.

He says both boys and girls are involved in the torment him at his home in Leith, Edinburgh, – and fears they are even using an air gun to target him.

The former national manager for Ede & Ravenscroft Tailors said he is now too terrified to go to sleep after he found an airgun bullet-hole in his bedroom window.

Wheelchair-user Graham – who underwent a triple heart bypass last year – has developed a string of health problems, including panic attacks, due to the abuse.Graham blasted the youths as “monsters” saying: “If my carer isn’t there and anything comes through the window, what do I do when I can hardly walk? I’m petrified.

“I’m frightened to go outside and it has to the stage that I can’t take it anymore.

“I’m depressed about it and I’m worried about my health – I just can’t settle at all at night or during the day.

“I have no idea at all why they are doing this to me, I have done nothing to anybody.”

David Ewins, 42, who has been Graham’s carer for 10 years, has had to stay overnight to reassure him.

He said: “I’m frightened in case he takes a heart attack.

“He’s just got that fear in his because he doesn’t know when they are going to appear – he is terrified in his own home.

“They are targeting his house all the time and he can’t keep putting up with this.

“He is petrified if I have to go out for an hour to get messages.

“There is also a pellet gun hole in his bedroom window.

“His home help can’t leave the window open to let fresh air in because the youths have been putting newspapers and banana skins through the window.

“If they set fire to a big of paper while he is in the house on his own then what chance has he got?”

Graham has lived at his flat in Leith for 11 years without any problems, before the yob attacks begun.

Police said they have visited his home on two separate occasions since the abuse began.

A police spokesman for said: “Lothian and Borders Police take all allegations of harassment seriously.

“We will make contact with Mr Bilsland in order to address the concerns he has raised.”