THREE young girls were left feeling “weird and uncomfortable” after a creepy dad felt them up while they were playing computer games. 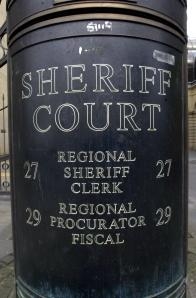 Douglas Richardson, 50, trained to be a teacher but never secured employment in education.

But he was exposed as a pervert after rubbing his hands all over the chests and thighs of the girls – who were as young as nine years old at the time.

Richardson’s seedy behaviour continued for almost two years and only came to an end when the worried children told other grown-ups and police were called in.

He insisted to police that he hadn’t done anything illegal but admitted that the charges against him “looked dodgy”.

The dad-of-one later admitted lewd, indecent and libidinous behaviour but today(Thursday) was allowed to walk free from Edinburgh Sheriff Court.

Sheriff Frank Crowe put him on the sex offenders register and probation for three years.

He told the Edinburgh man: “We don’t know what the long term effect will be on the children.”

Fiscal depute John Kirk told the court how the girls visited a friend’s house on various occasions between March 2006 and January 2008, but were left so disturbed by Richardson’s touching that they told their parents, who alerted police.

The girls – who cannot be named – said they were touched inappropriately a number of times at an Edinburgh address between March 2006 and January last year.

They also said he only let them play the computer on the condition they sat on his knee.

Mr Kirk said: “These three girls all attended the same school and all reported similar things happening to them.

“It was whilst they tried to play computer games within the house that he wouldn’t allow them to play the computer unless he was personally present.

“He would sit each young girl on his knee and touch them.

“One of the girls felt uncomfortable about this and reported this to her head teacher at school.

“Another of the girls’ mums also told the head teacher, who told police who then interviewed each of the girls, who said they felt weird and uncomfortable.”

Richardson, who has his own daughter, was interviewed by police and admitted the circumstances “looked dodgy” but insisted no criminal offences had taken place.

His defence agent Stewart Carson told yesterday of how Richardson wanted to become a teacher but failed to get a job.

He said: “Mr Richardson accepts the responsibility lies entirely with him for these matters.

“It would be in his long-term interests to get the benefit of the help available to him to ensure nothing like this happens again.

“He has no previous convictions or outstanding cases.

“He did teacher training for a while and that was not followed through by him because of a number of personal difficulties he had.

“He took up alternative employment until that ended as a result of today’s proceedings.”

Sheriff Crowe told Richardson that Scottish Ministers would now decide whether he should be banned from ever working with kids again.

He said: “You have previously been of good behaviour and admitted your guilt at an early stage and avoided any further strain for the young girls involved.

“You must accept that these are serious charges.

“There was no handling of genitalia and to that extent the charges are not as grave as many we see in this court.

“I will refer it for ministers to consider whether you should have restriction as regards to teaching or working with children, under the protection of young people legislation.”

Nurse who exposed himself on hospital ward struck off