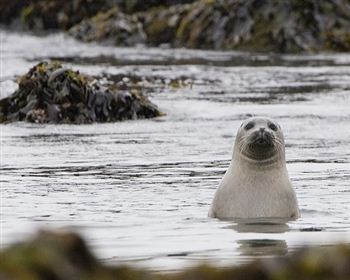 SCOTTISH Parly chiefs could crack down on seal culls after it was revealed numbers have dropped 40 per cent in places.

Tougher regulations on their slaughter have been recommended by a committee after campaigners revealed the shock figure.

The Rural Affairs Committee has advised that the regulations surrounding licences to kill seals be much stricter, and only be issued to those who are skilled, and using certain firearms.

It has also recommended that anti-predator nets be used more to save the killing on seals, and that all seal killings be reported at least every three months.

Those in the fish industry are able to obtain licences to protect fish farms from seals, however the committee has recommended it be more difficult to kill seals after campaigners claim populations have dropped dramatically.Scottish Labour MSP Elaine Murray, a member of the committee, believes that more regulation is the key to unnecessary slaughter of seals.

She said: “Scottish Labour would like to see greater protection for seals in the Marine Bill.

“The killing of any seal should be a last resort and only if all other methods of deterrence have failed, and applicants for a licence to kill seals must be able to demonstrate that all other possible non lethal methods have been tried unsuccessfully or would not work.

“We want the Bill to make it clear that a licence to kill will only be granted to people who can demonstrate a high level of marksmanship, using a suitable weapon and in sufficient proximity to the seal to avoid unnecessary suffering.

“We also believe that when a seal has been shot all incidents must be recorded and reported.”

While campaigners welcomed the stricter regulations, they are still pushing for a ban on any killing of seals during the seals’ breeding period, meaning that young seals are not left without parents.

Advocates for Animals’ policy director, Libby Anderson, revealed numbers of common and grey seals have dropped 40 per cent in five years in some places.

She added: “The recommendations in the report reflect many of our aspirations for a more robust seal protection regime than was proposed in the draft Bill.

“Of course we would prefer to see no killing of seals in Scottish waters and there is still the crucial issue of killing during the breeding seasons that has not yet been addressed.

“Unless the Bill is amended, licences may still be granted to allow pregnant seals or those with dependent young to be shot – meaning that orphaned pups could be left to starve to death slowly around our coastline.

“We will be urging the committee to support a number of amendments to give Scotland’s seals better protection from harm.”

Scottish Green MSP Robin Harper backed the campaigners’ stance, saying: “A prohibition on killing animals during close seasons is a fundamental animal welfare measure and is the case for most terrestrial mammals.

“At present, pregnant and nursing seals are being shot and dependent pups are starving to death or are being left at the mercy of the elements.

“It is imperative that we bring this unnecessary suffering to an end.

“Therefore, I will be lodging an amendment to the Marine Bill to ensure that licences to shoot seals are not granted during the breeding and moulting seasons of the grey seal or the common seal.”