A MAN lost control of a three-wheeled “Billy Connolly type motorbike” and crashed into the back of an iPod-wearing pedestrian who didn’t hear it coming. 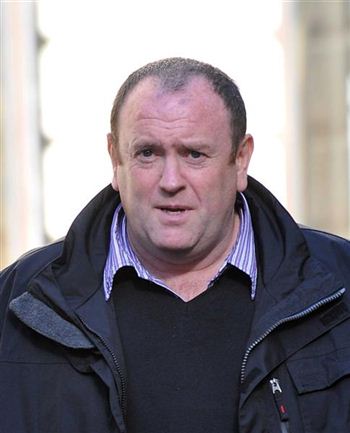 Craig Douglas had just bought his huge new motorbike and “couldn’t wait to have a shot,” despite being uninsured and without a full licence.

But he hit a dip in the road before smashing into Paul Hutchinson, 24, who had to be taken to hospital for cuts to his head and back.

Douglas, 42, admitted dangerous driving at Edinburgh Sheriff Court and was today (Thurs) fined £400 and hit with seven penalty points, meaning he loses his licence as a new driver.

While his victim was released from hospital the same day, Douglas suffered a leg injury which doctors say will leave him limping for the rest of his life.

And to add insult to injury, he claims he lost his security job after hearing he would lose his licence for the crash in Edinburgh’s Grassmarket.

His defence agent David Blair-Wilson said: “If you’ve ever seen the Billy Connolly World Tour series you’ll know what sort of contraption this was.

“It was a three-wheeled Billy Connolly type bike that Mr Douglas had only just bought.

“The man who sold it to him said you only need a provisional licence to drive these things and Mr Douglas couldn’t wait to have a shot.

“There was a dip in the road and he lost control.

“Unfortunately there was a man walking along the Grassmarket with his back to the bike listening to an iPod and he didn’t hear the bike coming.”

“Mr Douglas was knocked off his bike and the pedestrian was also knocked over.”

Court heard that the Edinburgh man was now unemployed having lost his job with an Aberdeen security company.

Mr Blair-Wilson added: “He is very contrite about the matter and realises he has got himself into difficulties.”

Sheriff Neil MacKinnon told Douglas: “You pled guilty to dangerous driving without a licence so you will be fined and your licence endorsed with penalty points.”