A POLICE pipe band tutor who is alleged to have groped a teenage girl on the group’s coach as they made their way home from a music competition has been suspended by the organisation. 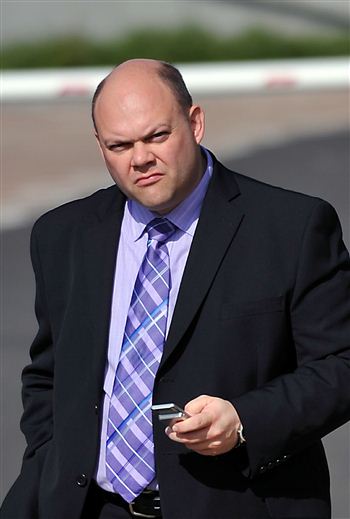 The 18-year-old girl, who cannot be named for legal reasons, claims Iain McAlister, 39, quizzed her about her nipples before unbuttoning her top and “tugging” at her boob.

McAlister – a bass drummer in the Lothian and Borders Police Pipe Band – was suspended by the group following the incident but denies sexual assault.

It is claimed he unfastened the girl’s clothing and placed his hand on her breast during a coach journey from the Scottish Pipe Band Championships on May 16 last year.

At Livingston Sheriff Court McAlister admitted he had made seedy jokes about her breasts and that he may have touched her “by accident”.

But – giving evidence at his own trial – he insisted he did not mean to upset the teenager and was not sexually excited by the incident.

And he claims the smutty innuendo was commonplace in the band, adding that “everyone was fair game”.

McAlister said he began cracking jokes after seeing the girl talking with two others in the band.

He said: “I got involved in a conversation with three people (including the girl).

“She had a blouse on which was very low and a vest top on underneath it.

“I told her that she reminded me of a photo finish in a Zeppelin race and I would not have minded her bra being full of pound coins.

It was at this point that the girl claims McAlister asked her what colour her nipples were before he reached over into her blouse and “tugged” at her breast.

The teenager – who had previously given evidence – said: “Iain McAlister unbuttoned the top button of my shirt and asked me what colour my nipples were. He asked if they were pink or if they were brown.

“His hand was under my vest top, I had a bra on that day. He touched a part of my breast that was not under my bra, just due to the shape of it. It was my top half.”

But McAlister insisted: “I did not mention the colour of her nipples.

During the course of the competition – which was held in Dumbarton – and the journey back to his home town of Bathgate, West Lothian, McAlister sank three cans of lager as well as a pint and “three-quarters” of a second one.

McAlister said: “I would still say I was reasonably on the sober side, more sober than drunk.”

And, he said, that type of behaviour was generally acceptable on the bus.

McAlister added: “It would never have been out of place any other time on the bus. It was normal banter that would take place in a similar situation.

“Everybody is fair game.”

McAlister – who admitted he had been suspended by the band – said he was not sexually excited by the incident and would not have engaged in the “banter” if he knew it would upset the girl.

Sheriff Martin Edington adjourned the case until next week for closing submissions before he makes his verdict.