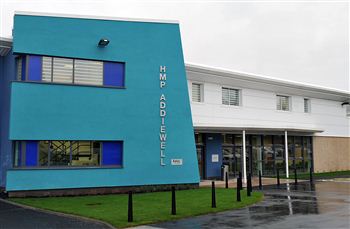 PRISON bosses are facing a double probe into a riot that left a jail guard in hospital.

Chiefs at HMP Addiewell in West Lothian are piecing together just what sparked trouble there on Sunday.

But they now face a police probe into assault claims at the high security prison.

And a second internal inquiry which must be presented to Scottish Prison Service bosses.

More than 20 lags rioted at the high security prison for six hours before on-site officers took control of the situation.Lothian & Borders Police were called out to the West Lothian high-security facility to support prison staff, but prison officers on-site dealt with the riot.

A spokesman for Kalyx said: “We can confirm that an incident took place in one area of one hall at HMP Addiewell, yesterday 11th October 2009.

“The incident, which began about 11am, was concluded at approximately 5.30 pm.

“It was dealt with by staff locally and was subject to minimal superficial damage of property.

“Incidents of this type regrettably occur in all prisons, but there are robust procedures in place to deal with them should they arise.

“This incident is now subject to a Police investigation and so it would be inappropriate to comment further at this time.

“A member of staff was taken to hospital and kept overnight as a precautionary measure and was released this morning.”

The incident is the second time this year that prisoners at the facility have rioted.

In February inmates trashed more than 60 LCD televisions and other luxury goods that the jail is fitted with after claiming they had not received any food for two days.

The maximum-security prison is home to many of Scotland’s worst murderers and rapists.

A spokesman for the Scottish Prison Service said: “We’ve had an incident report from Kalyx but any investigation would have to wait until the police have carried out their investigation.

“We have procedures with our contractors and we have a team that monitor the contract.

“But the most important report is the police report which is to come.

“It was a concerted peace of indiscipline and while it’s not a mild incident we shouldn’t get carried away, it started at 11 and was resolved by 5.30 and it was all contained within the prison.

“The important thing is that staff are trained properly to deal with this situation.”

In May Addiewell was exposed as having the second worst record for inmates attacking each other and inmate attacks on staff.

In the jail’s first six months 32 inmate on inmate attacks occurred, with only Polmont young offenders’ institute ranking higher, with 56 in the same time period.

‘Suicide’ teen Tweeted with friends hours before death on M8