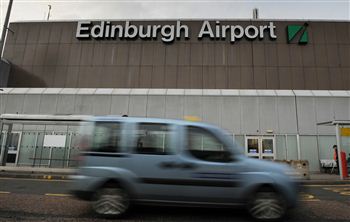 Work on the capital’s tram link uncovered the shell at Burnside Road just before 10am in the morning.

The area is just on the edge of Edinburgh Airport but authorities say the transport hub – the busiest in Scotland – was not evacuated and no flights were affected.

Lothian and Borders Police said their Explosive Ordnance Disposal (EOD) team removed the device and carried out a controlled explosion.

British Airport Authority (BAA) said that despite the bomb scare the airport worked as normal throughout the incident.

“This followed ongoing excavation works that are taking place as part of the Edinburgh Trams project.

“Bomb disposal experts were immediately called to the scene and have now removed the object. The airport operated normally throughout and no flights were affected.”

Transport Initiatives Edinburgh – who are building the tram line – insist the incident did not create a major hold-up in works.

Customer Services Director, Mandy Haeburn-Little, said: “Contractors working on the Edinburgh Trams construction uncovered what appears to be an ordnance shell near to the end of the tram route at the airport building.

“As soon as it was discovered, the relevant authorities were notified and appropriate action taken to ensure the safety of anyone in the vicinity.

“We understand that the object has now been safely removed and work has resumed.”

Edinburgh Airport was a military station until 1960 when the MoD handed over control to the then Ministry of Aviation to develop commercial flights.

As Turnhouse Aerodrome it was the most northerly British air defence base during the Great War when home to the Royal Flying Corps.

During World War II the runway was paved for the first time to handle the Vicker’s built Supermarine Spitfire which played a key role in seeing off German bombers during the Battle of Britain.

However last night it was still unclear where the ordnance originated.

A police spokesman said: “An expired ordnance was found by tram work excavations and it was disposed of by the EOD.”