A SCOTS squaddie is being pulled out of Afghanistan less than a fortnight after leaving Scotland – having been accused of an axe attack. 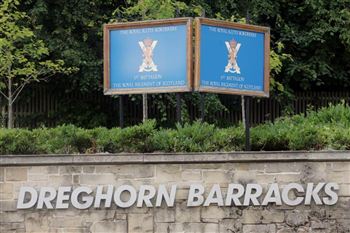 William Townsley, 18, was supposed to appear at court today in connection with a brutal assault said to have happened in April.

When his lawyer said he had just jetted out to Afghanistan with the Army, a Sheriff declared: “Send him home immediately.”

The Edinburgh teenager serves for the Royal Regiment of Scotland and left the capital’s Dreghorn Barracks on October 1.

He was described as an “important” member of the military by defence agent Mark Hutchison at Edinburgh Sheriff Court today.

He pleaded for the court case to be put off until Mr Townsley’s six-month tour came to an end in April.

But Sheriff Mhairi Stephen cut his trip short, saying that she had to bear in mind his co-accused, John Blyth, 22, was being held in custody over the same allegation.

The pair deny charges of hitting Stuart Campbell on the head with an axe in Edinburgh’s Caledonian Road on April 25.

“I know that in situations such as these the Army regard everybody as an important member and do not like removing anybody when they have plans made.

“However, he was advised not to go to Afghanistan by my office.

“The Army too were aware of this, but took the view that they want him out there.

“They can bring him back if the court requires.”

Fiscal Depute Melanie Ward said she would have to call for a warrant for Mr Townsley’s arrest, but Sheriff Stephen intervened.

She said: “The Army ought to have been told that a warrant could, and most likely would, have been granted today.

“All I can say do is to ask that you (Mr Hutchison) ask the Army to send him home immediately.”

The first diet hearing was continued until next Tuesday for Mr Townsley’s personal appearance.

Mr Blyth, whose address was given as Edinburgh Prison, was remanded in custody.