Edinburgh campaigners fight to save dog from death sentence 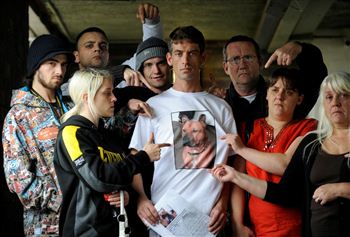 A DOOMED pooch is facing a death sentence unless campaigners in Edinburgh can find enough signatures to save him.

Craig Cunningham, from Leith, bought 12-week-old pup Leo thinking he was a Staffordshire Bull Terrier mongrel – but later found out that he was a actually a banned breed.

Now four-year-old Leo, who was confirmed by DNA tests as an American Pit Bull Terrier, has been taken by police and is waiting for an Edinburgh court to decide his fate.

More than 1,500 people have so far signed the petition urging the police to free Leo, who was seized under the Dangerous Dogs Act.

American Pit Bull Terriers are one of four breeds of dog banned under UK law after a number of attacks on humans – but Mr Cunningham insists that Leo is a “beautiful dog”.

Mr Cunningham, 33, said: “I cannot count the number of times I have been stopped by people, including the police, to be told he is a beautiful dog.

“My house is totally empty without him, I live alone so he is really my only companion.

“I feel really numb about the whole thing -this is like losing a son to me.”

He added: “I have no idea where Leo has been taken.”

Friends and neighbours of Mr Cunningham assert that Leo is popular with children in the neighbourhood, who sometimes ride on his back.

As well as distributing petitions across Leith, campaigners had given out T-shirts to raise awareness of the dog’s plight.

Craig said: “I’ve been told that if you have between 3,000 and 5,000 signatures on a petition, the courts are much more likely to take it seriously.

“He can do all sorts of tricks – he can open doors, turn lights on and off, and even tell the difference between a Twix, a Snickers and a Crunchie.

“He’s very much a local celebrity around here.”

The campaign to save Leo has even gone online, with distraught locals leaving heartfelt messages on a “Save Our Leo” group on Facebook.

One message reads: “I love this dog, he would not hurt anyone – please help us save Leo.”

Another says: “He is such an amazing dog and despite being bigger than me, he is extremely gentle and very well trained.

“Please show your support and save Leo!”

Mike Flynn, Chief Superintendent of the SSPCA, said that the case was “unfortunate”.

He said: “Anyone purchasing a pup from anywhere other than a registered breeder does so in the knowledge that their animal could be of undetermined breed.

“In the vast majority of cases this is of no consequence, however, it is very unfortunate when someone buys what they believe is a staffy-type puppy and it grows into a breed classed as dangerous under the 1991 Dangerous Dogs Act. 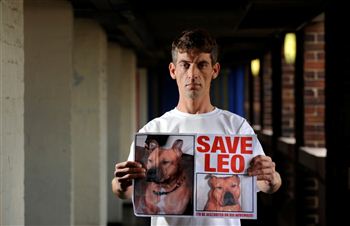 “We believe that any dog, regardless of its breed, can be aggressive if it is trained or encouraged to display this sort of behaviour by its owner.”

A court spokesperson said that Leo would be kept alive until a decision was made next month.

And a spokesperson for the procurator fiscal confirmed that as well as confiscating Leo, Mr Cunningham himself had been charged under the Dangerous Dogs Act, which can result in a £5,000 fine or six months in prison, or both.

Mr Cunningham added: “I feel that this is a race against time now, but the dog has done nothing wrong at all.

“I have every sympathy for families who have been affected by breeds like this, but it’s all about how a dog is brought up.

“I have trained my dog and he knows I am in charge.

“I always have him on a lead and always use a muzzle, all as precautions.”

American Pit Bull Terriers have been illegal since the 1991 Dangerous Dogs Act, which also bans the Japanese Tosa, the Dogo Argentino and the Fila Brasileiro.

It is illegal for anyone in the UK to own one of these breeds, unless specifically granted permission by courts.

Even then, a strict series of guidelines must be followed, including having the dog insured, registered and neutered.