A SCOTS restaurant has been judged one of the best in the country after winning a top food gong – for serving up PIZZA.

La Favorita in Edinburgh has been crowned with a prestigious One Star AA Rosette usually only reserved for such famous high end eateries as The Witchery and The Tower.

And it makes it the first pizzeria EVER to pick up the accolade in Scotland. 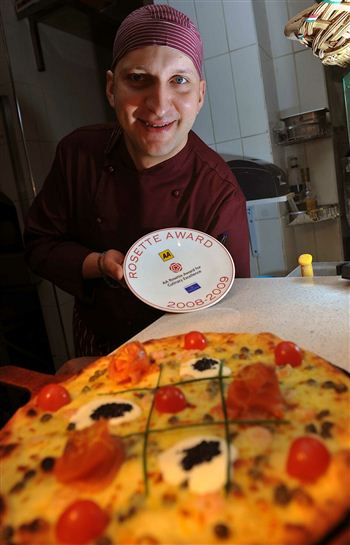 Judges made a sneak visit to the Leith Walk restaurant on September 4 and said they were blown away by its traditional wood-burning pizza ovens, fresh use of ingredients and service.

And last night jubilant owner Tony Crolla – who says he wants to have the best pizza restaurant in Britain – laughed that he could now set his sights on bagging a Michelin star to complete the set.

He grinned: “I’m surprised at receiving this award as we didn’t know the inspectors had been here – but at the same time I’m not surprised because I think we are one of the best restaurants out there.

“It is very flattering. “In particular, it’s very pleasing to be the first pizzeria to feature in these awards and to know we’re rubbing shoulders with other well-known names in the restaurant world.”

He said the secret of the 150 cover restaurant’s success was sticking to tradition, but knowing that pizza and pasta can involve fine dining.

The choice of pizzas include bases that can be made gluten free and rich toppings that include prawns and salmon.

He explained: “I’ve always believed that being a pizzeria does not mean people should in some way expect basic food.

“We’ve sought to make La Favorita one of the most stylish restaurants you’ll find anywhere in Scotland – as well as ensuring it has no rival when it comes to pizza.

“What makes it even better is that fact that AA Rosettes are handed out only on the basis of recommendations from members of the public, so someone has come in here and enjoyed their meal so much that they have contacted the AA and said ‘you should send one of your inspectors here’ which has then happened.

“I’d love to be able to thank that person because their actions have made my staff even happier than usual.“

La Favorita has already scooped another prize when it was named Pizza Restaurant of the Year at PAPA (Pizza Pasta and Italian Food Association) Awards.

But the prestigious AA accolade is the crowning glory.

Tony added: “Everyone knows what an AA rosette is and it’s something that everyone can take pride in.

“There’s Michelin stars and then there’s AA rosettes, so to have one is utterly fantastic.

“It may have been my vision to create one of the best pizzeria in the UK, but it was the hard, hard work of my team here, all the staff, that took my vision and made it a reality.

“So this is award is for them – and for the customers who enjoy our food so much.”

The AA said they awarded Rosettes only to local restaurants who served food prepared with care, understanding and skill who they judged could achieve “standards that standout in their local area”.

A spokeswoman said: “As far as we are aware La Favorita is the first pizzeria in Scotland to receive an AA Rosette.

“The restaurant impressed our inspector with the use of fine produce and traditional wood-burning pizza ovens, as well as the contemporary décor and friendly atmosphere.

“The AA is proud therefore to award La Favorita with one AA Rosette in 2009 recognition of its demonstration of culinary excellence.”

More details about their award winning menu can be found at http://www.la-favorita.com/