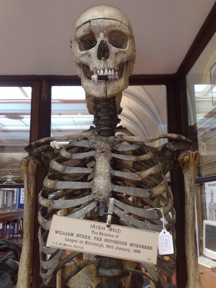 HOLLYWOOD movie mogul John Landis paid a visit to Edinburgh’s spookiest sites to prepare for his forthcoming film about the one of the Capital’s most grisly episodes.

The maker of Michael Jackson’s Thriller video booked himself on a private Burke and Hare murder tour to prepare for his comic-horror adaption – which already has Simon Pegg lined up to star.

Tour operators The West Port Tours, who are set to launch their Burke and Hare Murder Tours on 26 October, gave the famous director a one-off preview to help him scout for locations last month.

28-year-old Stuart Nicoll, co-owner of The West Port Tours, said: “I clocked him right away because I’m a big fan of Trading Places and Coming to America.

“Obviously the subject matter of the tour is dark and scary, so it was great to show him around.

“We made it clear that Burke and Hare weren’t actually grave-robbers, a common mistake that we wouldn’t want to see repeated on film.

“We took him to the Grassmarket and up to the West Port to show him the site of the old Tanner’s Close, where they carried out their murders.”

A spokesman for Ealing Studios, who first contacted the group, said that pre-production shooting on the film will begin in November.

However he dismissed suggestions that Bathgate-born Doctor Who star David Tennant would play Hare to Pegg’s Burke as “a rumour”.