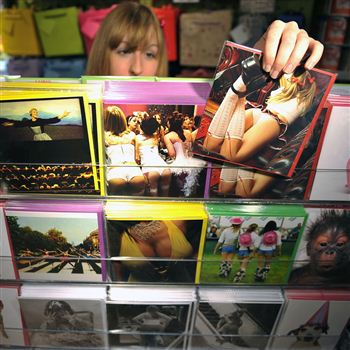 SCOTS love the personal touch when it comes to marking special occasions – and the chance to show their cheeky side – according to a new survey.

A poll by the Greetings Card Association has revealed that 94 per cent of Scots felt more special on receiving a card than a text, a Facebook message, or an email when it came to celebrating events like birthdays or anniversaries.

87 per cent of those questioned said they found a greetings card the most exciting way to hear from loved ones on a special occasion.

But the GCA survey gave a stark warning to those sending texts instead of cards, with 60 per cent of Scots finding them an impersonal way of marking special occasions.

And in a boost for traditional greeting cards, 75 per cent of those asked said they would be “really disappointed” if they only received Facebook and Twitter messages rather than cards on their birthday.Greeting’s card firm Scribbler say their customers always opt to send a stylish – and cheeky – card to make a statement.

Scibbler, who specialise in pop-art cards with risqué jokes, have been overwhelmed with demand for their cheeky cards, expanding their multi-million pound greetings card empire by launching two new Scottish stores in Glasgow and Edinburgh in recent months.

The retail outlet’s extensive range of edgy and stylish cards has seen shoppers giggling all the way to the post box to send tongue-in-cheek messages like “Gay for Pay” and wedding cards declaring: “I’m saving myself for my second wedding”.

Glasgow store manager Fiona Lynch said that the sharp-witted cards have been flying off the shelves fast at the new Buchanan Street store in Glasgow.

She said: “Of course, sending a card is a great way to show you care, but people are definitely displaying their cheeky sides when they shop here too.

“It is the cards that poke fun at things, and even those have a bit of rude language that have been selling well in Glasgow.

“Cards are definitely still the best way to celebrate a special occasion – they are much more personal than sending a Facebook message or a text.”

The survey showed that Scots often aimed to make a statement about themselves by sending greetings cards, as well as pleasing another person.

More than a third of those questioned admitted they wanted to show people their sense of humour by the card they chose.

A further 37 per cent wanted to tell others they were thoughtful and caring.

And nearly three quarters of Scottish people surveyed thought the best way to show off such personality traits was by sending a card.

And of those Scots questioned, only 13 per cent thought they could show friends and family their best qualities via email.

Fiona added: “When people buy a card they are making a statement about themselves.

“They are saying look at the kind of card I buy, I have a good sense of humour.

“A lot of our cards are quite original so people want to show they are cool by sending them.

“We have already sold out of some of our funniest cards in the Glasgow store – so the humorous ones are proving to be a bit of a hit.

“We have had a really good response since opening and a lot of laughs from customers coming into the store for the first time.”

The average person in the UK sends 31 cards annually.

Sharon Little, chief executive of the GCA, said: “These findings show the importance British people still place on using cards to communicate with friends and family.

“It’s interesting that the majority of people see them as an extension of their personality, taking care to choose something that reflects their best qualities

“With the plethora of social networking sites available, and in today’s busy times, there is a growing temptation just to fire off a quick message.

“It’s therefore great to see that people still take the time and effort to send a card to mark special occasions.”