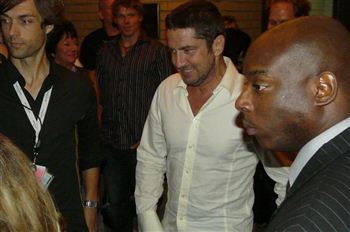 HEARTTHROB Gerard Butler has spoken out about the acting guru who transformed his career.

Famed acting coach Larry Moss, who has worked with some of the biggest names in Hollywood including Leonardo DiCaprio, left Butler “sobbing his guts out” after one intense session.

But 39-year-old Butler has criticised his $1,000-an-hour fees, labelling the price tag “an absolute fortune.”

Butler, who is originally from Paisley, enlisted the services of the famed acting coach to prepare him for a role in the mini-series Attila the Hun.

He said: “He was so expensive, but I had two lessons with him when I landed Attila the Hun and I wanted to run over the script with him – he cost an absolute fortune.”But Gerard added that experience was unforgettable.

He said: “While we talked about the script he made me delve into myself so much – my passion, my pride and my patriotism.

“And I thought: why shouldn’t that be me up there?”

After his role in the mini-series he played King Leonidas in violent war movie 300, which launch him onto the red carpet of Hollywood A-list stars.

However former coach Moss hit back at Butlers’ “expensive” claim, saying that it was “hilarious” that rich stars were complaining that they had to pay so much for lessons, also adding that they were under $1,000.

He said: “I find it humorous but also irritating – I think it does have to do with his upbringing and how people view money in different countries.

“It’s hilarious that people who make millions in a film don’t think that they should pay a good amount for a person that actually makes the difference in their performance or in their career.

Recalling his coaching sessions with Butler, he said: “He struck me as having a profound sadness and a kind of anger at the state of the world.

“I felt very deeply from him that he had experiences in his life, things that weren’t fair, and that he was angry about those things.

“He got very emotional – he was sobbing his guts out.”