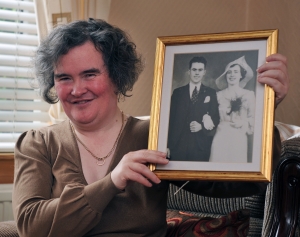 The Blackburn-born global superstar will perform to a crowd of celebrities in ITV’s “An Audience with Susan Boyle”.

Susan, 48, will perform songs from her soon-to-be released album I Dreamed A Dream in an hour-long special.

A TV source said that the show would be ITV’s “jewel in the crown” for their Christmas programming.

A source said: “Susan started her career at ITV so it’s only right that it should properly take off on ITV as well.

“Already people are calling it the jewel in ITV’s crown this Christmas.

“The show could be screened across the globe and be one of ITV’s biggest ever ratings successes.

“Britain’s Got Talent judges Simon Cowell, Piers Morgan and Amanda Holden will definitely want to be there but producers are considering inviting celeb fans like Demi Moore and Ashton Kutcher.

“Susan’s show will be the must-watch programme over the festive period.”

A spokesperson for STV said that the programme would be broadcast by UK counterpart ITV, who could not be contacted yesterday.

The news comes as “SuBo” was taken ill last week, being rushed to hospital on Friday amid internet speculation the singer might have contracted swine flu.

An ambulance was called to her council house in Blackburn, West Lothian, at 3am on Friday morning, when the spinster was taken to St. John’s hospital in East Lothian.

It later emerged that the singer had an upset stomach, and returned home later that day.

Susan’s manager, Nicola Phillips, insisted she was “fine”, adding: “We have no further comment – I am not in a position to say what was wrong with her because that is private.”

Locals at the Happy Valley Hotel in Blackburn offered the singer their support.

“Her whole life has been turned upside down and we just cope she can cope with it.”