FOUR elderly couples say they have been stranded in their homes after their mobility scooters were taken and driven “like dodgems” – before being destroyed.

They disappeared from properties in Midlothian over the last week, leaving disabled residents unable to leave their homes. 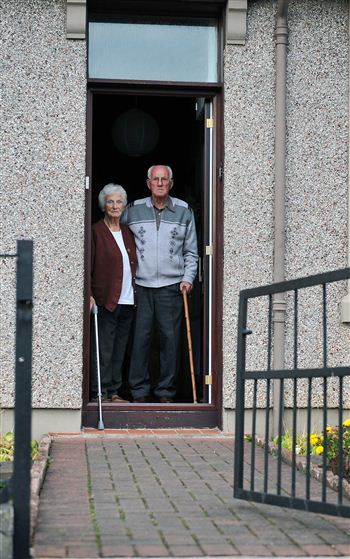 One elderly resident was taken by police to see his wife’s scooter, which had been wrecked and dumped – leaving her housebound.

Duncan Forrest, from Newtongrange had his £2,000 scooter taken while he and his wife slept.

The 89-year-old said: “I just cannot believe that someone would do this to another person – I am disgusted.

“Maybe some day when these people are out age they may have to rely on one of these scooters – then they will know how it feels.

“I often use it too, but it’s mainly for my wife. Without the scooter we cannot go out anywhere together – we need it to even go out for a breath of fresh air.

“Whoever took the scooter used it like a dodgem and then dumped it when the battery ran out.

“The police took me to the station to see it, but I think they were actually afraid to tell me straight away – it was mangled.”

Duncan has had to spend £150 to repair the scooter so he and his wife can leave their house to have a walk together.

Jimmy O’Donnell, 71, also from Newtongrange, had his mobility scooter taken from his garden shed and later found by police smashed up.

His wife Heather, 62, said: “Jimmy won’t be able to go down the street without the scooter – he will be housebound.”

Two more scooters have been allegedly stolen from The Square and St Annes, in the same Midlothian town.