A FAMILY run Chinese restaurant has been landed in hot water after getting a bill for a staggering £11,000.

Karen Wong’s Chinese restaurant in Edinburgh has been charged the huge fee for just three months last year – despite the fact that their next highest bill was just £575. 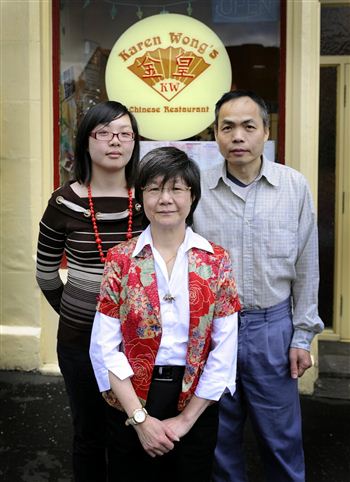 And the family – who fear they may have to close the business – say that the monster bill for was the quietest time of the year.

Mr Wong, 50, – who runs the business with husband Wah Keung and daughter Hoiying – says that she was stunned when she found out they owed the crippling figure.

She said: “I got a big shock when I opened the letter – I nearly passed out.

“This is a small restaurant so how could we have used that much water?It is impossible, it doesn’t make any sense.”

Business Stream, who supply their water, checked the meter and pipes for faults, but found nothing that would have pushed the cost of water up by more than 1900 per cent.

Karen’s daughter Hoiying said that have received several letters already saying the 50-seat restaurant, based in the Newington area, is facing being cut off the water grid if they don’t pay up.

She said: “The plumber told us that it wouldn’t be possible for us to use that much water even if we had left all the taps running constantly for days on end.

“We have not changed our water consumption at all.

“We still prepare food the same way and business is actually down because of the credit crunch, so we are using less water.

“My mum is on the verge of tears every time they phone, she is really stressed and can’t sleep properly because of all this – we just don’t know what to do.

“We have phoned and sent letters out – we have sent about four since August this year – asking Business Stream to look into it again, but they are not doing anything about it.”

The massive bills are for the period from the end of August and November last year, with the 50-seat restaurant receiving several demands since January.

A spokesman for Business Stream said: “When we realised that the water consumption was higher than expected we put in a new meter and tested the old one.

“The old meter was shown to be recording accurately. We have worked with Karen Wong to identify ways of reducing the amount of water that the business uses and now their consumption has dropped to 300 cubic meters per quarter – a more standard level for a restaurant business.

“We know that an unexpected bill can cause problems so we have contacted Karen Wong directly to find a solution that ensures they can keep trading.”

However, Hoiying believes that maintenance work last year may have been the cause of the crippling bills.

She said: “Last May Scottish Water did some maintenance outside the restaurant for a week and a half.

“They were drilling holes in the ground and they sent a letter saying they would switch off our water supply one of the days, but they never switched it off.

“I think this has something to do with our bill, but Business Stream said any work should not have increased the consumption of water.

“It is a lot of money for a small business and it would be hard to us to afford it.”