FAMILIES of servicemen and woman who lost their lives fighting in Iraq have demanded they be allowed to meet former Prime Minister Tony Blair “face-to-face” when he gives evidence to the Iraq Inquiry.

They were today allowed to meet members of the independent inquiry into the war which is touring the UK speaking to bereaved families, and put their case for an emotional showdown.

And all the relatives agreed that they want to be there when the former Prime Minister finally appears before the inquiry into the invasion of Iraq. 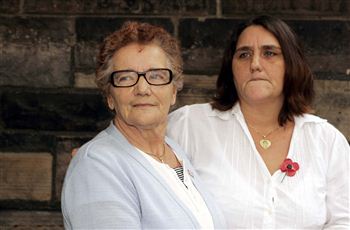 Rose Gentle, who’s son Gordon was killed in Iraq, questioned the panel on its investigation at the Apex Hotel in Edinburgh.

She said: “When it does go to London and Tony Blair gets asked to give his statement, will the families be allowed in to hear what he says?”

When the Sir John Chilcot, chair of the inquiry said he couldn’t “guarantee a seat”, Rose replied: “We want to be face-to-face with him – get a bigger hall.”

Valerie O’Neill also blamed Tony Blair for the death of her son, Kris, who was killed after his un-armoured Land Rover drove over an IED.

The 27-year-old medic – who was an Acting Sergeant – was on his third tour of Iraq when he was killed, after his vehicle drove over an IED at a crossroads in Basra on 5 April 2007.

Three other soldiers died in the horrific explosion, including 2nd Lieutenant Joanna Yorke Dyer – a close friend of Prince William – and Private Eleanor Dlugosz, the only other medic to be killed in the Iraq war.

She said: “I had to come here because I didn’t get the letter from the MoD inviting me to the inquiry in Manchester.

“We were at an event at St Paul’s in London and someone mentioned to us that the inquiry was visiting various cities and I had no idea – the MoD had our address from two and a half years ago.

“There were no WMDs and no Taliban regime to remove – we went in there for the oil and nothing else.”

When asked what she would like to say to Tony Blair over the decision to invade Iraq, she said: “Why did you lie to us over the WMDs?

“How does it feel to be responsible those all those deaths?

“While you’re sitting on Silvio Berlusconi’s private yacht, my grandson has no father.

“The inquiry has given me the strength ask the questions I’ve been wanting to ask.

“I don’t think I could have done this if I had have been weeks or months after Kris died.

“It’s helped meeting the other families who have been through the same things as we have.

“They said they have support groups here but in Halifax we don’t have anything like that, it’s helped to talk about it with people.

“When it was first announced a lot of people thought it would just be a cover-up but by having the chance to ask these questions and meet the people involved.

“I want to be there when Tony Blair and maybe even Gordon Brown are asked to give evidence.

“How can he go around the middle east as a peace envoy when young soldiers are still being killed because of the decisions he made.”

She added that this week is particularly tough for their family, but that she is still determined to get answers surrounding the war that led to her son’s death.

She said: “It’s Kris and Tina’s wedding anniversary on Friday, they would have been married seven years now, if he was still here.

“They were married on my birthday, so it used to be a really day special day for us.

Robin and Daphne Wild were also at the event to question the inquiry yesterday, but they were frustrated that previous inquiries had failed to answer their questions.

Their young freelance journalist son was killed in Baghdad just 10 days after arriving in the Iraq capital.

Richard Wild was shot in the back of the head while he waited for a taxi outside one of Baghdad’s main museums, which had been looted during the invasion.

His father Robin, 68, former Chairman of the Scottish District Courts Association and the Government’s former chief dental officer said: “Time has moved so far on that the political machine in ensuring the real culprits are not revealed.

“Richard went out to report on the peace not the war.

“He wanted to see the reconstruction after the war, but there was none, none of the promised rebuilding of the country.

“There have been inquiries already, most of which have been a whitewash.

“Mr Scarlett got a promotion and a knighthood out of it, Mr Blair will become president of Europe, and we lost our son.

“The question we asked at the beginning was ‘what right have we as a country to go into another country to change their regime when our own democracy is so flawed?’”

The inquiry has been examining thousands of documents relating to the war in Iraq and in events leading up the decision to invade.

The public evidence hearings are due to begin in late autumn.