A SHERIFF told social workers to send text messages to cons during the “inevitable chaos” of the postal strike. 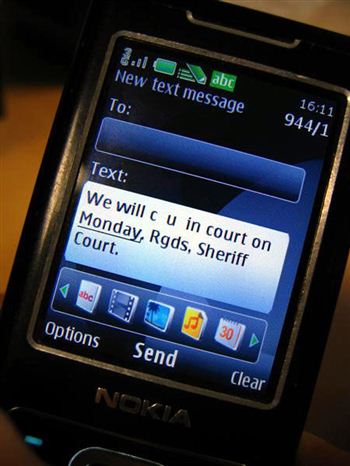 Thousands of Scots postal staff walked out in support of a national strike today (Thurs) over Royal Mail’s modernisation plans.

But Edinburgh Sheriff Deirdre MacNeill QC said yesterday that texting would be a more reliable option during the strike.

Presiding over a case at the capital’s Sheriff Court yesterday, she bailed an accused woman and told her: “Considering the inevitable chaos of the postal situation it might be a good idea for you to tell the social work office your mobile number.

“Ask them to send you a text instead of posting you the date of your assessment.”

It is expected around 78,000 delivery and collection workers across the UK will walk out today (Friday).

“Left with no choice”

Causing disruption was “the last thing we wanted” according to the CWU’s Graham Steedman, who joined those striking outside the capital’s Cutlins Road depot.

He said: “There’s about 20 members here and that will increase as the morning goes on and people start turning up.

“We’re quite upbeat. Obviously the last thing we want is to be out on strike and causing disruption, but we were left with no choice.”

The strike had less of an impact in the South of Scotland, where post arrived as normal according to the Scottish Borders Chamber of Commerce chairman William Rodgers .

He welcomed the “sensible approach” of Royal Mail staff in the Borders.

He said: “It’s a great relief to businesses across the region that the great majority of Royal Mail staff are working as normal.

“We know from communications with postal workers that they are keenly aware of their importance to the community they serve and that their jobs are wholly rooted in the loyalty of their customers.

“It’s just common sense that any withdrawal of labour at this time would be self-defeating.

“What we all need to see is a sensible modernisation of the Royal Mail based on discussion and agreement.

“We are not so confident of deliveries tomorrow when no doubt the militancy of the large sorting offices has cut in, but meanwhile we would like to thank the staff in our own region for their sensible approach and unfailing good service.”

Quick-thinking wife saved heart attack hubby, 79 – by driving him to their vet